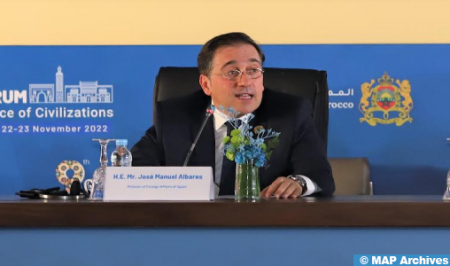 Spain is ”very satisfied” with the positive cooperation momentum with Morocco and the results of the bilateral roadmap, set up last April, Spanish Minister of Foreign Affairs, José Manuel Albares, underlined on Thursday in Barcelona. “We are very satisfied with this new stage and this dynamic that marks the bilateral relations, as well as the achievement of the roadmap’”, established on the occasion of the visit of the President of the Spanish government, Pedro Sanchez, to Morocco, at the invitation of HM King Mohammed VI, said Albares during a press briefing at the end of a working meeting with his Moroccan counterpart, Nasser Bourita, on the sidelines of the 7th Regional Forum of the Union for the Mediterranean (UfM). “All working groups meet on a permanent basis and these meetings are bearing fruit,” said the top Spanish diplomat, adding that illegal immigration from Africa has been reduced by 20% and bilateral trade has increased by 30%, Spanish exports reaching 7 billion euros since the beginning of the year. This meeting, the seventh between the two ministers, was an opportunity to “continue to advance the Spanish-Moroccan roadmap, which is being implemented point by point,” said Albares, noting that both countries continue to cross agendas, so that the High Level Meeting can be held as soon as possible.