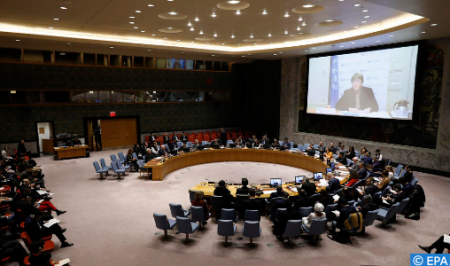 Members of the UN Security Council have offered their “most sincere” condolences to the Kingdom of Morocco following the death of a Moroccan peacekeeper in an attack Thursday against the UN mission in the Central African Republic (MINUSCA). The martyr of peace was a member of the Royal Armed Forces contingent deployed within this UN mission. In a press statement adopted on Friday, the UNSC members expressed their deepest condolences and sympathy to the family of the peacekeeper, to Morocco, and to the United Nations. They condemned in the strongest terms the attack on the Obo airfield in the southeast of the Central African Republic. For his part, UN Secretary-General Antonio Guterres expressed, in a statement issued by his spokesman, his deepest condolences to the family of the deceased peacekeeper and the Kingdom and people of Morocco. He strongly condemned the attack, noting that MINUSCA has opened an investigation to establish the facts regarding the death of the Moroccan peacekeeper. In addition, Guterres expressed to the Ambassador, Permanent Representative of Morocco to the UN, Omar Hilale, his deepest condolences to the family of the deceased peacekeeper and the government and people of Morocco. Under-Secretary-General for Peace Operations, Jean-Pierre Lacroix, conveyed to Ambassador Hilale his condolences to the government and the Royal Armed Forces following the death of the Moroccan peacekeeper. “I thank Morocco once again for its commitment and support to our operations, despite the very heavy price resulting from this,” he said, adding that the UN “will do its utmost to hold the perpetrators accountable for this act”. In a tweet, the UN official also expressed his sincere condolences to the relatives of the Moroccan peacekeeper killed in the attack in CAR, while serving for peace with the UN mission. He noted that an investigation has been opened and the perpetrators of this heinous act will be held accountable. Also, the Security Council and the UN SG have emphasized that attacks on UN peacekeepers may constitute war crimes under international law.