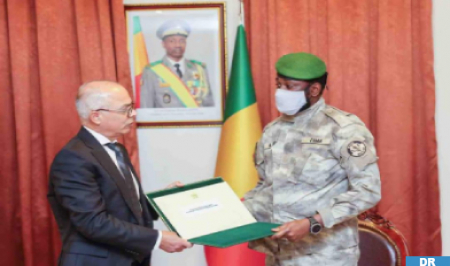 President of the transition in Mali, Colonel Assimi Goïta, Head of State, received in audience, Friday in Bamako, Minister of National Education, Preschool Learning and Sports, Chakib Benmoussa, who carried a message from His Majesty King Mohammed VI. In a statement after the audience, held in the presence of ambassador of HM the King in Bamako, Driss Isbayene, Benmoussa said he handed the Malian president a message of brotherhood and friendship addressed by His Majesty King Mohammed VI. In this message, the Sovereign reassures the Malian authorities of His willingness to develop the historical and special relations between the two countries, said the Minister. The royal message also voices the readiness of the Kingdom of Morocco to further strengthen cooperation with Mali in the cultural, economic, military and security fields to contribute to the stability of the region, added Benmoussa.