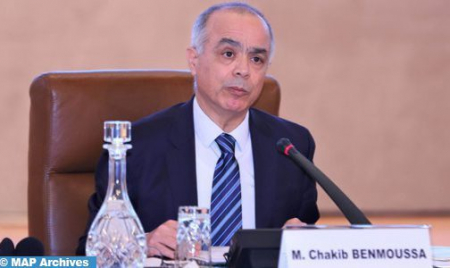 Minister of National Education, Preschool Learning and Sports, Chakib Benmoussa, handed, on Monday in Gaborone, a message from HM King Mohammed VI to President of the Republic of Botswana, Mokgweetsi Masisi. On this occasion, president Masisi welcomed the quality of cordial relations between the two countries and expressed his congratulations to the Kingdom following the victory of the national team against Belgium during the World Cup in Qatar. At the end of this audience, Benmoussa said he handed the Botswana president a message of brotherhood and friendship addressed by HM King Mohammed VI. The audience, which took place at the Presidential Palace in Gaborone in the presence of Moroccan Ambassador to South Africa, accredited to Botswana, Youssef Amrani, was also an opportunity to highlight the Kingdom’s African policy, initiated by His Majesty the King, to contribute to the consolidation of stability and development of the African continent. The audience was also attended by Minister in the Presidency, Kabo Neale Sehele Moraweng, as well as Secretaries General of the Presidency and the Ministry of Foreign Affairs of Botswana.