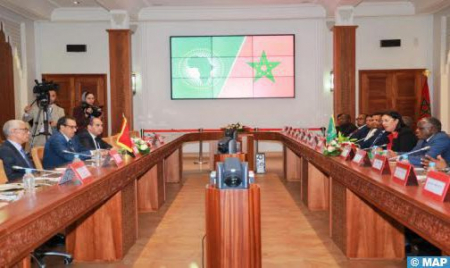 Speaker of the House of Representatives, Rachid Talbi El Alami, held talks, Monday in Rabat, with Chairman of the Administrative Tribunal of the African Union (AU), Sylvester Salufu Mainga, in the presence of members of the AU Technical Committee. The talks focused on relations between Morocco and the AU, as well as the firm determination of the Kingdom, under the wise leadership of His Majesty King Mohammed VI, to infuse a new dynamic to the structures of the AU and development in Africa, said a statement by the House of Representatives. During this meeting, Talbi El Alami also gave an overview of the specificities of political and constitutional institutions as well as the Moroccan parliamentary experience, in addition to the relationship between the House of Representatives and other institutions and powers, emphasizing the important achievements made by Morocco in several areas, pursuant to the provisions of the Constitution of 2011 which has enshrined the principle of separation of powers, the same source added. For their part, Salufu Mainga and the AU Technical Committee expressed their appreciation of the reforms carried out in Morocco, in accordance with the High Directions of HM King Mohammed VI, stressing their interest in the Moroccan experience, especially since the return of the Kingdom to the AU. The delegation said that its visit to Morocco is part of consultations and discussions on the revision of the law governing the work of the AU Administrative Tribunal, dating from 1966, as well as the internal regulations of 1967, according to the statement.