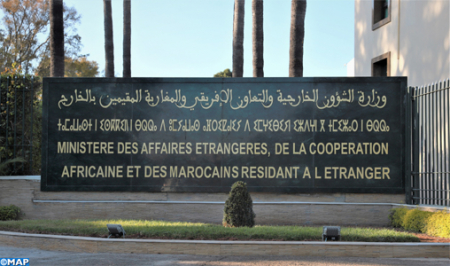 The Ministry of Foreign Affairs, African Cooperation and Moroccan Expatriates and the Indian Ministry of External Affairs held on November 24 in Rabat the 5th session of Morocco-India political consultations. These consultations were co-chaired on the Moroccan side by Abdelkader El Ansari, Ambassador, Director of Asian Affairs and Oceania, and on the Indian side by Ausaf Sayeed, Secretary General at the Indian Ministry of External Affairs, who was accompanied by Indian Ambassador in Rabat. During these consultations, which also took place in the presence of Director of Consular and Social Affairs at the Ministry, Fouad Kadmiri, the heads of both delegations welcomed the great momentum instilled in bilateral relations since HM King Mohammed VI’s historic visit to India in October 2015, during which the Sovereign agreed with the Indian Prime Minister, Narendra Modi, on the establishment of a multidimensional strategic partnership between the two countries, adapted to geostrategic realities and major challenges of the globalized economy, said a statement by the Ministry of Foreign Affairs, African Cooperation and Moroccan Expatriates. The new dimension taken by Moroccan-Indian relations illustrates the enlightened policy of His Majesty King Mohammed VI, aimed at diversifying and expanding the Kingdom’s strategic partnerships, which now include major countries such as India, the statement said, adding that in this context, the Indian official welcomed the visionary leadership of HM the King to engage Morocco on the path of progress and prosperity. According to the same source, the relations of strategic partnership between the two countries include a political dialogue marked by friendship, mutual solidarity and support for national sovereignty and territorial integrity of the two respective countries, as well as the implementation and consolidation of cooperation with the realization in recent years of a score of bilateral ministerial visits and the signing of forty agreements and MoUs covering a wide range of sectors. In order to give a more consistent content to these ties, added the statement, the two delegations have exchanged on ways to further strengthen cooperation in the diplomatic, parliamentary, economic, security, consular, health, food security fields, and agreed to examine the possibilities of expanding it to the green energy, electronics, biotechnology, automotive and aerospace sectors, among others. The two parties also discussed opportunities for cooperation in the cultural, academic and university, tourism and film industry fields. They also discussed cooperation in the consular field as well as the possibilities of cooperation and exchange of expertise and best practices concerning the supervision and protection of the respective national communities established abroad. The discussions also focused on the possibilities of establishing a triangular cooperation for the benefit of African partner countries, in accordance with the High Directions of HM the King, which gives Africa and South-South cooperation a priority place in the foreign policy of the Kingdom, as well as the policy of India towards the African continent, particularly in the framework of the India-Africa Forum. The two delegations also discussed cooperation between the two countries at the multilateral level, including within the United Nations and the role that India can play for the bringing together of Morocco with Asian regional organizations, the statement concluded.