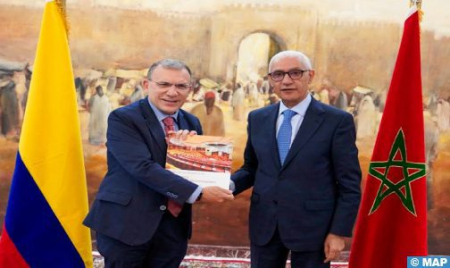 Speaker of the House of Representatives, Rachid Talbi Alami, met Tuesday in Rabat, with the Speaker of the Colombian Senate, Roy Leonardo Barreras Montealegre, on a working visit to Morocco. This interview, which took place in the presence of the Ambassador of the Republic of Colombia in Morocco, José Salazar Acosta, was an opportunity to highlight bilateral and multilateral parliamentary relations, as well as the role of parliamentary diplomacy, said a statement from the first chamber of Parliament. Emphasis was also placed on the importance of the parliamentary friendship group, the exchange of visits and permanent consultation for the promotion of bilateral relations.   During this meeting, Talbi Alami stressed that Morocco respects the territorial integrity of States and works for the promotion of international peace and security. The Kingdom which respects the sovereignty of States rejects any interference in its internal affairs, he insisted. After indicating that this meeting provides an opportunity to clarify positions and strengthen parliamentary dialogue, the Speaker of the House of Representatives reviewed the achievements made by Morocco in several areas, under the enlightened leadership of HM King Mohammed VI. He also presented an overview of the latest developments in the issue of the territorial integrity of the Kingdom, highlighting the regional and international support it enjoys and inviting Colombian parliamentarians to visit Morocco to see firsthand the development and prosperity experienced by the southern provinces. Talbi Alami has in this sense invited the President of the House of Representatives of the Republic of Colombia to make a working visit to the Kingdom.