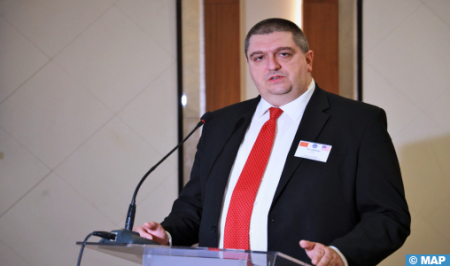 The Director of the Office of Counterproliferation Initiatives at the U.S. Department of State, Thomas W. Zarzecki, highlighted, Tuesday in Tangier, Morocco’s leadership in the Proliferation Security Initiative (PSI). Speaking at the opening of the PSI Meeting for North Africa, organized by the Ministry of Foreign Affairs, African Cooperation and Moroccan Expatriates and the Departments of State and Defense of the United States of America, the senior U.S. official highlighted the leadership of Morocco in the framework of the PSI, praising the efforts made by the Kingdom to promote the principles of the Initiative in Africa. Zarzecki also commended Morocco’s efforts to promote peace and security in the region and to enable it to be well-equipped to better combat the proliferation of weapons of mass destruction. After noting that Morocco and the United States of America share the same vision for strengthening their cooperation to expand the membership of the Initiative, the U.S. official expressed the willingness of the U.S. side to continue to share its expertise with the Moroccan security departments, with the aim of addressing conventional and emerging security threats in the Mediterranean and the African Atlantic coast. He also emphasized the symbolic importance of holding this important meeting in Morocco, which reinforces the close relationship between the Kingdom and the United States and highlights the efforts made by Morocco in promoting the principles of this Initiative in Africa. The U.S. official recalled that the Proliferation Security Initiative, launched in 2003 and involving 107 participating countries, aims to combat the illicit transport of weapons of mass destruction, their means of delivery and related materials, noting that this meeting will allow member countries to exchange experiences and best practices and strengthen national capacities and interdepartmental coordination in the field of non-proliferation. The organization of this regional meeting by the Kingdom of Morocco is part of the implementation of the terms of the Strategic Dialogue between Morocco and the United States of America in its security component. The goals of this three-day meeting are to promote the PSI in Africa and to encourage more countries in the region to join the Initiative.