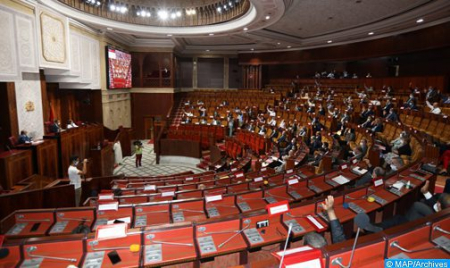 The House of Representatives adopted Thursday in plenary session, the majority of the draft law of finance (PLF) No. 50.22 for the year 2023 in the second reading. The 2023 Finance Bill has received the endorsement of 102 MPs, while 27 others opposed after the vote held in the morning in the Committee on Finance and Economic Development in the House of Representatives by a majority, during a plenary session chaired by the Vice President of the House, Mohamed Sabbari. No MP has abstained. The draft was adopted in the first chamber of parliament as it was returned from the House of Advisors, after the approval of a series of amendments that relate, among other things, the general tax code. At the level of corporate income tax (IS), an amendment retained is a tax rate of 35% for companies whose net profit is greater than or equal to 100 million dirhams, with the exception of service companies that have acquired the CFC status or benefiting from the specified regime, and companies operating in industrial acceleration zones. With regard to income tax (IR), an amendment providing a 36-month exemption from IR for new recruits on permanent contracts under 35 years of age until December 31, 2026 has been adopted, in addition to the exemption of donations paid directly to beneficiaries, without the intervention of the employer, of the IR, as well as the reduction of the advance on the IR by the lawyers from 300 DH to 100 DH, with the extension of the duration of the exemption for the benefit of the new lawyers of the advances from 3 years to 5 years. On withholding taxes, the rate of withholding tax has been revised downward for legal entities from 20% (initially proposed) to 5%, limiting this withholding to income paid by the State, Institutions and Public Enterprises, in addition to a withholding tax for the remuneration of non-salaried teachers in schools and doctors not subject to business tax, and the reduction of the withholding tax for insurance contracts retirement savings from 30% to 15%. For the status of self-employed, an amendment increasing the annual turnover under the services performed by the self-employed or the taxpayer subject to the regime of the single professional contribution was approved, on behalf of the same client, and the surplus is subject to income tax by way of deduction at source, from 50,000 DH to 80,000 DH. Speaking at a plenary session held Monday at the House of Advisors dedicated to the general discussion of the PLF-2023, the Minister of Economy and Finance, Nadia Fettah said that the government has taken a series of measures to cope with rising prices imposed by the current situation, noting in this regard the support of basic materials whose expenses are expected to 40 billion dirhams (MMDH) during the year 2022. She also stressed that the government has taken bold decisions for the preservation of purchasing power, especially in this exceptional situation marked by rising prices. In addition, she said that our country has succeeded in managing its public finances, as evidenced by the maintenance of Morocco’s guarded rating by Standard & Poor’s Global Ratings, which ensured the stable outlook of the financial balances of the Kingdom. Referring to the conditions of the elaboration of this PLF-2023, she said it enshrines the implementation by the government of its commitments of the government program, in accordance with the Royal High Directions and the new development model (NMD), noting that this is the first project bearing the political touch of the current government, and reflects its political vision to face the various challenges, whose major concern is to preserve the purchasing power of citizens, and limit the effects of imported inflation on their daily lives.