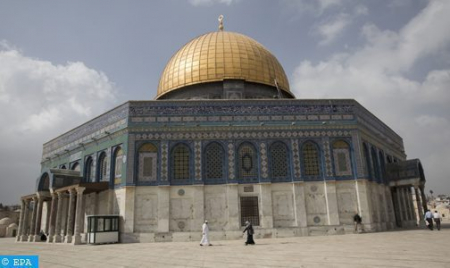 The Secretary General of the Presidency of Al-Quds University, Safaa Nasser Eddine, paid tribute, Wednesday in Fez, to the pioneering role of His Majesty King Mohammed VI, Chairman of the Al-Quds Committee, in defending the Holy City and supporting the resistance of its inhabitants. Speaking at a workshop organized by the Bayt Mal Al-Quds Agency in collaboration with the Agency for the dedensification and rehabilitation of the city of Fez and the Ministry of National Planning, Urban Development, Housing and Urban Policy, Nasser Eddine expressed her gratitude for the constant support provided by His Majesty the King to back the struggle and resistance of the Palestinians in general and the Maqdessis in particular, in the face of the practices and violations of the Israeli occupation authorities. She also praised the important role of the Bayt Mal Al-Quds Agency in supporting the residents of Al-Quds for many years, in various sectors of vital importance. In this context, the Palestinian official said that the University of Al-Quds ensures a crucial role in preserving the authenticity of the holy city and its defense against Israeli attempts to Judaization, stressing the concern of the university to preserve the architectural and cultural heritage of the city and preserve its Arab-Islamic identity. This workshop is part of the visit, on December 05-12, of a delegation of Palestinian engineers from Al Quds in Morocco. On this occasion, the reference document for the restoration and maintenance of archaeological buildings in Al Quds was approved and will be incorporated into the guide of procedures and measures that regulate the interventions of the Bayt Mal Al Quds Agency in the restoration and reconstruction of the Holy City.