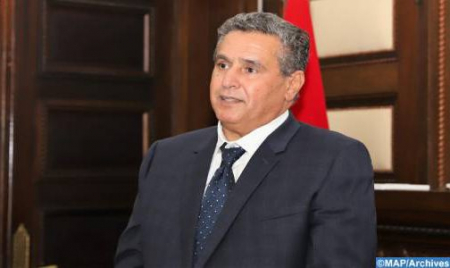 The China-Arab Cooperation and Development Summit opened, Friday in Riyadh, with the presence of Arab heads of state, representatives of Arab delegations and the President of the People’s Republic of China Xi Jinping. The Head of Government Aziz Akhannouch represents His Majesty King Mohammed VI at this summit, which has a large participation of the League of Arab States, the Republic of China and the Presidents and Secretaries General of several regional and international organizations. This first China-Arab summit, which constitutes a key step in the partnership process between the Arab States and China, will examine ways to strengthen bilateral relations in all fields, the prospects for economic cooperation and development, based on the distinguished relations linking the two parties. The summit will also discuss mechanisms for implementing communication bridges to serve the mutual interests of the two sides in various fields, such as poverty alleviation, food security, green development, climate change, trade, industry, technological development and sustainable development goals. It is an important mechanism to develop the exchange of expertise between Arab countries and China and to address the current global political, economic and cultural challenges. It will give a new impetus to the strengthening and development of Sino-Arab relations, in the wake of the current global transformations, and will be an opportunity to consolidate the historical relations between the two parties, deepen cooperation in all fields, and strengthen exchanges between their respective civilizations. At the summit, Arab leaders intend to work to raise the level of relations with China, build more consensus in the areas of governance, development, security and civilizational dialogue. The holding of the Sino-Arab Cooperation and Development Summit in Saudi Arabia reflects the interest of the Arab and Chinese leaders in developing aspects of cooperation, adjusting the strategic directions of the Arab countries with China, the world’s second largest economic power, developing a common vision and mechanisms of understanding and launching and supporting qualitative initiatives.