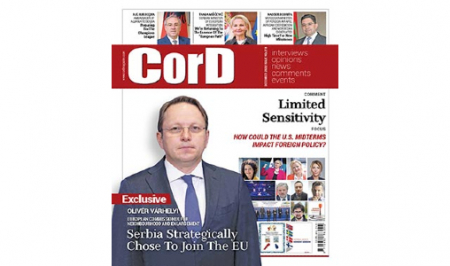 The Minister of Foreign Affairs, African Cooperation and Moroccan Expatriates, Nasser Bourita, has highlighted the depth of Moroccan-Serbian relations, which are called to “set new milestones”. “It is high time to set new milestones and raise our cooperation to an unprecedented level in the context of current challenges,” he said in an article published by the Serbian magazine CorD, which devotes, in its December issue, a special feature to the celebration of the 65th anniversary of the establishment of diplomatic relations between Rabat and Belgrade. Bourita stressed the need to take advantage of the unique opportunities available to both countries in a situation marked by unprecedented transformations, complex challenges and multidimensional risks. “As a committed global partner of Serbia, Morocco wishes to move forward side by side to take advantage of this situation to embark on a much more promising path of mutual prosperity,” said the Minister of Foreign Affairs, highlighting the centrality of human relations, which are the main element “to connect our two states of geostrategic importance and to better connect Africa to the Western Balkans.” Bourita also stressed the strength of relations between “two strong nations in the face of adversity, which have gone through key moments hand in hand, as the 1st Conference of the Non-Aligned Movement in Belgrade in 1961, and between “two peoples united in the defense of their national sovereignty and their respective territorial integrity. In his opinion, the bond that unites the two countries “is not only the expression of a deep relationship rooted in history, but it is also “the main attribute of the credibility and reliability enjoyed by our two states in international society and in our bilateral relations.” Although separated by geography, Morocco and Serbia “share a common core of values that align our visions and weld our external action,” he said. “Based on the principles of mutual respect, common interest and a shared and enlightened vision, Morocco and Serbia have come a long way to deepen relations in many respects, especially in the most sincere and structural aspects,” the minister added, noting that the friendship between the two countries “has not been neglected.” Indeed, he said, “His Majesty King Mohammed VI has personally cited Serbia among the inner circle of friends of the Kingdom,” seeing it as “the most significant signal of the excellence of these relations. Returning to the 65th anniversary of the establishment of diplomatic relations between Morocco and Serbia, the minister noted that the commemoration of this jubilee is “an invaluable opportunity to build bridges of dialogue, communication and exchange” through many means that include business, art, history, cinema and music. “I am firmly convinced that we can do more. On the occasion of this jubilee, it is the responsibility of our governments (…) to provide the right content to meet the expectations of our two heads of state and our two peoples,” he stressed. To this end, the time has come, according to Bourita, to jointly explore the opportunity of a fully invested strategic partnership. “A partnership that can provide us with the necessary means to respond to the transformations underway and take advantage of the immense opportunities available to us.” The minister also stressed the need to have a framework “that structures the flow of work that our two diplomatic corps, our public institutions and our governments can use as a springboard to achieve the political and economic goals we want for our relationship.”