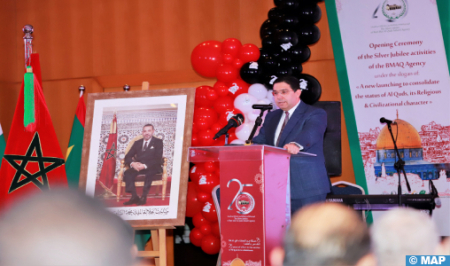 Minister of Foreign Affairs, African Cooperation and Moroccan Expats Nasser Bourita highlighted, on Friday in Skhirat, the sustained action on the ground carried out by the Bayt Mal Al-Quds Asharif Agency, under the leadership of HM King Mohammed VI, with the aim of improving the living conditions of the inhabitants of the Holy City. Speaking at the opening of the celebrations marking the 25th anniversary of the establishment of the agency at the Mohammed VI International Conference Centre in Skhirat, the minister stressed that, in implementation of His Majesty the King’s high directives, this institution is constantly engaged in fulfilling its noble mission to act on the ground to preserve the cultural identity of the Holy City, improve the living conditions of its inhabitants and support their resistance and presence in Al-Quds. The minister, chairman of the Agency’s guardianship committee, noted that such guidance has given the agency a good reputation and great respect among brotherly countries in the Arab and Islamic world in general, and among Palestinians and the inhabitants of Al-Quds in particular. He stressed that the celebration of the 25th anniversary of the Agency is part of HM King Mohammed VI’s constant concern to preserve the Arab and Islamic identity of the Holy City and the Sovereign’s firm commitment to help its inhabitants to resist through daily and continuous social and humanitarian field work with them. As for Morocco, he added, thanks to the enlightened vision of HM King Mohammed VI, the Kingdom has remained faithful to its commitment to the just Palestinian cause and to the protection of Al-Quds in particular, deploying relentless efforts to strengthen and develop the Agency’s action, whose budget Morocco has contributed since 2011 in the category of state donations and nearly 70% in the category of donations from institutions and individuals. The Agency has spent some $65 million in 25 years, a record that has enabled it to implement more than 200 projects benefiting all social groups in the city, spread across the sectors of reconstruction, restoration, property acquisition, health and education, agriculture and support for the local economy. The media, culture, publishing, youth, sports and children’s sectors have also benefited from the agency’s support, in addition to accompaniment, training and social assistance for orphans, widows and the disabled. On this occasion, Bourita affirmed that Morocco’s position, under the wise leadership of HM King Mohammed VI, chairman of the Al-Quds Committee, remains firm and rejects any prejudice to the legal and historical status quo of the city of Al-Quds and the Al-Aqsa Mosque, stressing the need to refrain from anything that could fuel tensions in the Middle East region. The minister concluded that Morocco, convinced that peace in the Middle East remains a strategic option, will continue its efforts by investing its capabilities and taking advantage of its distinguished relations with all parties and international powers to contribute to any international effort to revive peace and negotiations, the only way to end the conflict.