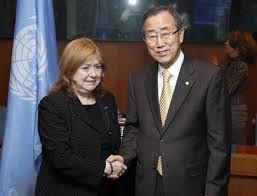 UN Secretary General Ban Ki-Moon is putting pressure on the Polisario again, the objective being to force the Algeria-backed Sahrawi movement to soften its position in a bid to resume negotiations with Morocco over the Western Sahara issue.

But this time, Ban Ki-Moon has preferred to leave his Personal Envoy for Western Sahara, Christopher Ross, out of the undertaking. Instead, he dispatched his chief of staff, Susana Malacorra to the Tindouf camps that she visited over the weekend.

At the Polisario headquarters in Algeria, the UN official met with the head of the separatist movement Mohamed Abdelaziz who until then had been dealing exclusively with Christopher Ross. However, the American diplomat seems to have lost the confidence of Algeria and the Polisario.

Last March, Ban Ki-moon’s personal envoy had proposed to the Polisario and its mentor Algeria alternative solutions to resume the settlement process. Rather than remaining stuck onto the independence option upheld by Algiers and the Polisario, Ross suggested a combination of confederalism and autonomy proposed by Morocco.

Algiers remains stubbornly opposed to the autonomy plan to maintain pressure on Morocco through the Western Sahara issue, a bone of contention between Rabat and Algiers for over 40 years.

In fact, since the setback suffered by Algeria and the Polisario at the Security Council in April 2015, “Algeria has changed its tune and tries to gain ground at the level of the African Union,” says a Sahrawi notable from the Tindouf camps who follows closely the developments of the Western Sahara issue.

The UN does not recognize, however, any role of the African organization in the Western Sahara issue, as evidenced by resolution 2218 adopted by the Security Council in April. The text, voted unanimously by the 15 members of the Council, makes no mention of the AU, commented the Sahrawi notable. He explained that AU’s inability to resolve other crises in Africa has greatly undermined its credibility among Africans themselves and even more among the international community members.