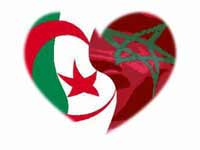 The UN Security Council is due to vote today on Western Sahara resolution which would extend the mandate of the MINURSO for another 6 months or more. Meanwhile, a mysterious collective of Moroccan and Algerian Internet activists responded with an website entitled “Majorité Silencieuse” aiming to work, according to its founders, for the reconciliation: “our objective is that the vision developed by Peter Van Walsum (UN Secretary-General’s Special Envoy to Western Sahara) becomes the new motto and relegate the battles by interposed media in the past, dispute whose victims are the people of the two countries”
This initiative is interesting in a way that it will be the first time that we witness a movement re-uniting Moroccans and Algerians who use to participate in an internet war without mercy on Western Sahara forums and who get mobilized in such a strong way so that the issue can emerge.
Beyond these elements, this unprecedented viral mobilization aims in starting a dialogue -though virtual- following Peter Van Walsum declaration, who was welcomed by Moroccans who did not expect that much from the personal Envoy.
Will the Net be an original mean to resume the dialogue between the two neighboring countries?