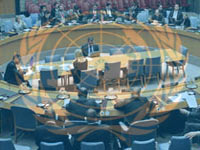 On Wednesday after rough discussions, The UN Security Council 15-member countries had finally voted unanimously the new resolution on Western Sahara.
The UN 1813 resolution introduced the concept of “realism” into negotiations. One “realistic” year is what recommends the 1813 resolution, calling on Morocco and the Polisario Front to enter a «more intensive and substantive phase of negotiations”.
UNSC has also extended the MINURSO mandate for one year instead of the usual six months underlining its will to give the talks a new dimension, Morocco and the Polisario having so far held four rounds of talks in Manhasset without noticeable results.
By introducing the “realism” concept into negotiations, the council validates Peter Van Walsum analysis who has concluded on April 21st that “independence of the Western Sahara is not a realistic option”.
Meanwhile, in his declaration to the press, the US Permanent Representative to the United Nations has reaffirmed the US support to the Moroccan autonomy initiative calling on the Polisario Front to hold talks on a “realistic” basis as suggested by the Moroccan autonomy proposal…