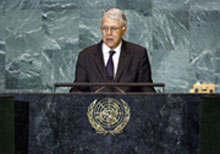 Algeria has described Morocco as an “occupying power” while in the contrary, Morocco is a great federator.  This country has always showed a political good-will to go forward and to build a common destiny with its neighbors because the stakes exceed the regional competitions and the strategies of power.
The Western Sahara conflict, which has lasted too long, is in fact a big barrier for the countries of the area development.
By adopting by consensus a resolution on Western Sahara supporting the process of negotiations in progress, the fourth committee of UN General Assembly (UNGA) has confirmed on October 21 that the Moroccan proposal for autonomy was realistic and credible.
In its initiative of autonomy which is not other than a modern and democratic form of self-determination rejected by the Polisario Front with the support of Algeria, Morocco showed its will to give the sahraouis the right to run their region affairs democratically; it multiplies its efforts for the socio-economic development of its provinces in implementing new infrastructures and creative projects for jobs.
“Under no circumstances, will Morocco be made hostage to the calculations of others” has asserted Mohammed VI. The detractors of the territorial integrity of Morocco cannot ignore the international community support to the Moroccan initiative plan to resolve the conflict.
This lasting conflict is not good neither for the populations held in Tindouf camps nor for the democratic projection of the Maghreb countries.
Let’s build a stable, prosperous and developed Maghreb, work on unity and overcome our strategies for power…