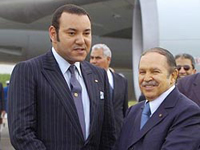 If we believe the daily Arabic newspapers “Al Quds Al Arabi”, in an article published on the 17th November, 2008 (N0. 6052), the Algerian President Abdelaziz Bouteflika has dismissed Mr. Abderrachid Boukerzaza, Minister of Communication, and Mr. Hamraoui Habib, Director General of the Algerian Television, following a television program during which a professor in political sciences has pronounced insulting words while talking about the King Mohammed VI of Morocco.
If the source is credible, the measure taken by the Algerian President, even if it is in relation with the current situation, should be perceived  as premonitory. Messages exchanged between the two Chiefs of State have always been mutually respectful and have always given off this conviction that the destiny of the two countries is the same, and that they are condemned to share the same objectives, because the two peoples have suffered a great deal from a shared history. But if the Algero-Moroccan trouble is the result of geopolitics created out of “colonial partition as compensation”, Moroccans and Algerians need first of all some peace, as there is no development without peace and we can not guarantee prosperity and well-being with cynicism, neither extinguish fire with fuel.
Stability in the region goes through the consolidation of opening forces and connection forces. These forces are the media in Algeria as well as in Morocco, and which have the responsibility to respect the moderation trend as regard to history, to limit the damage, to avoid manipulating the minds, opinions and conscience by infringing the laws of political, social and religious ethics in harmony with deep ambitions of the two peoples.
The constitutional reform which would be proposed to Algerians opens officially the road to a third mandate for the President Bouteflika who has succeeded to reformat the hard disk of Algeria to become the only one in charge. Today, nobody can keep him from continuing his mission, except may be his health problems.
At the twilight of his career, Mr. Bouteflika will have to face three challenges, to be bailed out by the democrats, approve the Islamic movement without being hostile to the military institution, get out of the deadlock of the Sahara issue and guarantee to the Algerian people a minimum of well-being within the Maghreb Union. To reach these objectives, the Algerian President has all the cards in his hand.