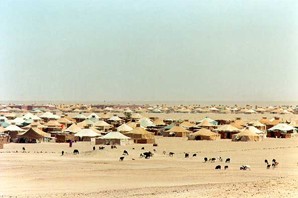 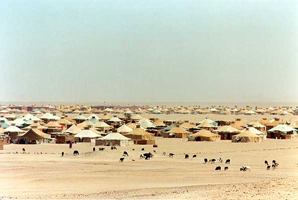 Throughout its long and tireless fight for the Western Sahara decolonization, Morocco has asserted its rights as well as geographic, historical, political, legal and ethnical titles and even the simple logic that each of the Maghreb countries has the right to its Saharan extension. The Kingdom was convinced that it was not wrong unless it should reexamine all the frontiers and accept the creation of a State less peopled and too extended stretching from the Atlantic to the Red Sea. The Saharan space, as for its historical vocation, has never been a divisor, but rather the fosterer of a civilization source of unity inspiration.
The Spanish-Moroccan dispute over the Sahara decolonization, which would have been solved in the 1960’s, has been drawn in many endless negotiations after the discovery of phosphate deposits. Madrid government has simultaneously practiced pressure over the Jmaa members and the National Sahrawi Party in order to mobilize around its independent cause, but unsuccessfully, while starting an anti-Moroccan propaganda campaign directed by Laâyun Radio and Realidad Newspapers. All these tactics were foiled.
The diplomatic offensive of Morocco, the order of the International Court of Justice, the Green March, the agony of the General Franco and the difficult transition in Madrid have created a favorable context for Spain to finally yield to the legitimate claims of Morocco. Algeria is before a new data after many efforts to occupy the first place, as it has but a feeling of frustration vis-à-vis the idea that Morocco, recovering its Saharan extension, might destruct this dominant position. The Sahara issue has then become a stake between Morocco and Algeria, Spain being eliminated from the Algerian accounts, Algeria had then to find a reason. It acts rapidly to prepare its formula.
After the Sahara liberation, a liberation movement has been created.
A people that the Spanish have never encountered and of whom the Algerian have never mentioned the existence as a neighbor during the Spanish colonization. Many researchers, such as the Mexican Claudia Barona Castaneda and others, have carried out in this sense deep research in the precious archives of the Colonel Vigorie without ever succeeding to identify this people’s existence. In the same way that Spain and Algeria have used, regarding this pseudo people, only designations as the Sahara people, coming from the Sahara or natives of the Sahara.
As for the so called principle about the respect of the inherited frontiers of the colonization and while admitting that it should be accepted without being imposed, its legal validity in the Sahara case can come in force only at the departure of the Spanish occupier in 1975.
Finally, and the height of  lack of decency, is the proclamation of a ghost puppet republic without territory nor people, looking all the time for self-determination while bargaining the fate of a sequestered hostages reserve in Tindouf .
In the Sahara issue, the logic itinerary has not been and is still not easy. And as the virtue of the logic should be satisfied and respected unless to perpetuate the absurd, this absurdity is always there, it exists in the stubbornness of the wish to impose the consumption of a  : An indigestible  hastily prepared  meal: the Polisario.