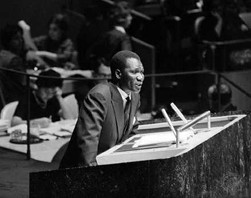 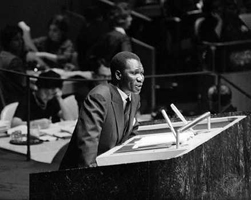 Ahmed Sekou Touré, First President of the Republic of Guinea, was the sole African leader to have opposed the French union project proposed in the 50’s of the last century by the General De Gaule. He and his people had fully assumed the shortcomings.
A left-winger, convinced, fair, revolutionary, Ahmed Sekou Touré was one of the first founders of the African Union. Intervening before the Committee of Wise Men created by the OAU, and meeting in Freetown in order to find a solution for the Sahara issue. The late Ahmed Sekou Touré, whose country did not have then diplomatic relations with Morocco, expressed his point of view as a wise African concerning this issue. After having been silent during a three days debate before the Committee of Wise Men, within a confused environment marked with attempts to hide the truth, Ahmed Sekou Touré has pleaded as follows:
« This dispute conflicts with the principles having constituted the basis for the OAU foundation of which Morocco is one of the main founders. The Kingdom had supported the Algerian revolution during the liberation war, and has fiercely opposed the French OCRS project. We have never heard about a national Saharan feeling, if it has existed, we would have supported it. For us, only Morocco claimed the Sahara. We have supported it throughout its long fight against the Spanish colonialism. We have supported Roberto for a period, and have recognized him as the representative of Angola. However, when the MPLA has emerged as the legitimate representative of the Angolan revolution, we have been honest with Roberto, Guinea granted him the nationality. Morocco has supported the Congolese nationalism and its symbol the martyr Lumumba, but nothing then could stop the infernal colonialist and imperialist machine having led to the assassination of Lumumba, and even the elimination of the UN Secretary General Dag Hamarjeold. We have opposed the Biafran separatism in order to preserve the territorial integrity of Nigeria, despite the fact that we had Biafran friends. What was the role of the Committee of Wise Men? It is a work tool and not a sovereign body designated by the Council of the Presidents, its mission emanates from the summit.
The OAU had made, while waiting for the results of the Committee’s investigations, a request to the UNO and to the non aligned to avoid taking a stand in this issue. I have been chosen as a member of the Committee in order to find a compromise, and not aggravate the conflict. Too many errors have been made; the Committee has created a sub-committee composed of the Presidents Traoré and Oubassageo. This sub-committee has made a serious error, as it did not submit its report to all the members of the committee. I have not attended the Committee meeting until the moment we have found ourselves before the fact accomplished during the OAU 16th Summit in Monrovia. The OAU is neither a syndicate of the presidents nor a political party; it is an organization composed of the States having to take into consideration realism and unity. Morocco has informed the OAU President about the case of the two members of the Committee of Wise Men having recognized the SADR, Mali and Tanzania and who can no longer be judges and parties. We have to apply the article 27 of the Charter, stipulating that its interpretation requires a two thirds majority. The Committee should firstly respond to the subsequent issue about the dispute, otherwise the SADR admission, even with 49 voices over 50, constitutes a violation of the Charter. The OAU Secretary General had no right to formulate his own opinion concerning this issue. Today that the Sahrawi State exists for some, and that it seems for them a reality, why then be in need for a Committee of Wise Men ? It should be kept in mind that Morocco with its Sahara is a people and a State, and that illegality should not overcome equality.” But unfortunately, scarcely does the OAU, used to hedge, take resolutions so defined against a member State, it has been then deliberately lost in this issue, while the reason behind its creation was the African unity. It is a daring manoeuvre.