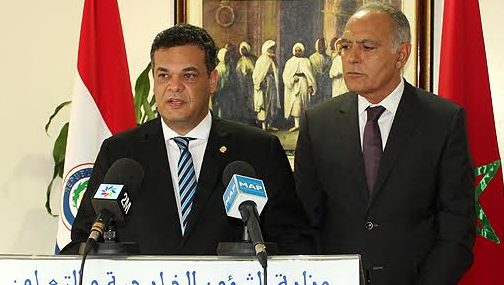 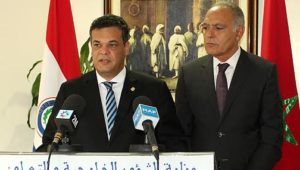 Paraguay reiterated on Wednesday its support for Western Sahara as a Moroccan territory.

The support was voiced by Chairman of the Senate, Roberto Acevedo Quevedo, who is currently on an official visit to Morocco at the head of a Paraguayan delegation.

The Paraguayan delegation “came to support the Kingdom of Morocco in the dispute (over the Sahara) and confirm its conviction that the Moroccan cause is a just cause,” said Acevedo Quevedo, at a joint press conference held on Wednesday in Rabat with the Moroccan Minister of Foreign Affairs and cooperation, Salaheddine Mezouar.

The President of the Paraguayan Senate also expressed his country’s determination to give a strong impetus to cooperation and trade relations with the Kingdom of Morocco.

For his part, the Moroccan Foreign Minister underscored the two countries’ keen resolve to boost bilateral cooperation in various fields and to strengthen relations between their parliamentary institutions, in view of the key role these institutions can play in the rapprochement between Morocco and Paraguay.

The Paraguayan delegation’s visit reflects the two countries’ shared determination to strengthen and diversify their economic and trade exchanges and to reinforce their political ties, said Mezouar.

The opening of a Moroccan embassy in Paraguay and the exchange of visits between the two countries’ officials and MPs confirm this shared determination to give a new impetus to bilateral relations.