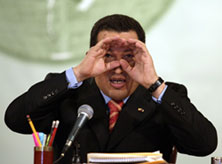 Considered as a hero by the Arab and Muslim masses for his courageous support of the Gaza people against the Israeli aggression, the Venezuelan President Hugo Raphaël Chavez Frias is known for his political identity which is neither evident nor transparent and sometimes even unsettled. Unlike Castro, Chavez talks often about God and the Christ in his speeches. He cites the gospels and his citations are sometimes invented. Chavez is also seduced by the exacerbated anti-imperialist nationalism and pretends to incarnate the radical fight against “the empire” while his country is intimately linked to the United States through an irresistible flux of oil commerce and the consumer emulation. He multiplies the most heteroclite faith professions declaring willingly to be castrist in Cuba, Maoist in China or admirer of the green book of Kadhafi in Libya, some consider him a cynic opportunist, obsessed by power and totally deprived of the real convictions, maintaining more than a personality cult.
The Venezuela had lived under the aegis of a private income and wasteful State capitalism, it is still as such. The system’s inefficiency is reflected, inter alia, through the chaotic management of social programs (Bolivarian missions) and Chavez can no longer attribute his failures and deceptions to his surrounding. Even in the eyes of a growing break of the popular basic class, which has been massively obtained in December 2007, the good chief is naked. Voices are openly rising against the leader’s abuses and denounce the nepotism and corruption of the Chavez family in the Baris State which governor is the president’s father, a former teacher. The Chavez mayor of Caracas publicly confesses that the base of the regime popularity is in decline and the revolution shows exhaustion signs.
The ideological and political conception of a revolution is that it has to be, before all, a providential driving force of change and not a source of honor, of prestige, of personal or clannish promotion or a dream of excessive popularity, hence the concept perversion. The Medieval myth of the good chief Chavez and of his bad counselors is omnipresent according to one of his relatives “Chavez is badly surrounded; he does not know the truth, they lie to him concerning what happens in his country and elsewhere”. The Caribbean messiah is undoubtedly sincere when he declares that his heart bleeds for the damned of earth, but seems to forget  deepening  his investigations before giving his support to a pseudo liberation movement the Polisario which despite the families’ cries and the international community’s protests holds as hostages, in miserable conditions, thousands of innocents in the camps of shame in Algeria. While their brothers and sisters in the Sahara, under the Moroccan sovereign, enjoy self-determination the whole day and lead the development of their region with willingness stronger than the sands.
The Venezuelan president does not certainly ignore that the scope and stake of the Algerian-Moroccan conflict to which is added the Sahara issue as alibi wrapped in a red coat of the revolution. When Morocco talks about Algeria, it does not mean the Algerian people with whom it has strong links of fraternity, but rather its leaders with whom the conflict has taken a passionate shape which origin is to be found in a hegemonic rage. Morocco, which is the first country to have launch a revolution in Africa that of a King and his people, will defend at any cost the Moroccanity of its Sahara.
Between a revolutionary and auto-parody messianic, the whole thing lessened by pragmatism sometimes unexpected and the courage of a leader, Mr. Chavez is an unclear revolutionary.