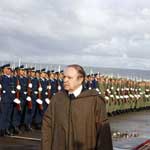 In an interview with the Spanish daily « El Pais » in March 2007, when asked about the Sahara conflict and its consequences on the future between Algeria and Morocco, the President of the Algerian Republic Abdelaziz Boutaflika stated : « I have said on several occasions that the Western Sahara issue would in no way be at the origin of a « casus belli » war declaration between Algeria and Morocco, but the absence of a fair and final solution for the Western Sahara issue will be a restraint to the Arab Maghreb Union development ».
As an answer to the question about the possible reopening of frontiers between the two countries, the Algerian Head of the State has indicated « that it was not necessary to talk once again about the circumstances of their closing and the repercussions generated, hence the delay in their opening”. The Algerian Head of the State re-elected today is aware that since then many things have changed, which means to defuse the people’s self-determination debate, inherited frontiers of the colonization etc. These terms have become victims of their excessive usage, and, with time, they do only serve unveiled hegemonic ambitions.
It is clear that the more a concept is a stake object, the more it is a source of confusion. This is what the international community has finally understood. By refusing to calm down, the Polisario does not want to sincerely negotiate with Morocco, while giving the impression to want to do it, unaware of the fate of the poor innocents held as hostages, and claiming at each occasion its threat of holding arms, Algeria forgets that it does not serve the movement it has created.
At the time when the Saheli zone becomes a new land for terrorism conquest in an inhospitable region, the Algerian President’s reassuring declarations do not put an end to the tragedy undergone by the two Algerian and Moroccan brother peoples, who yearn for getting close. Holding the frontiers closed, a windfall for smugglers of all obstacles set up within a prosperous business, a conflict artificially maintained in deadlock, Moroccans and Algerians, twin brothers, cry from their heart about living such imperfect days. What the Maghreb people would hope from Mr. Boutaflika is to overcome the adversity basis, to reconsider the mistakes and to repair the repairable.
The Algerian Head of the State is convinced that Morocco, King and people, will not relinquish their right in the Sahara as an integrant part of Morocco. Asking Morocco to hand over the keys to others can be diagnosed as absurd, believing that they would accept another solution than autonomy under the Moroccan sovereignty is also an absurd thing. Mr. Boutaflika thus knows where the restraint to the Maghreb union development lies, he is the only person able to lead the Maghreb towards peace and concord.