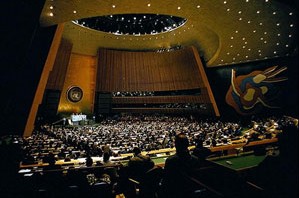 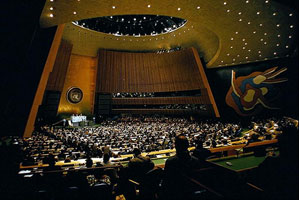 Based upon the last report of the UN Secretary General, the Security Council has prolonged, Thursday April 30, 2009, with a year, the mandate of the United Nations Mission organizing a referendum in the Western Sahara (Minurso), in charge mainly of organizing a self-determination referendum and monitoring the cease fire between Morocco and the Polisario Front.
In this unanimously adopted resolution, the Council calls once more the involved parties “to continue to show a political will and to work within a favorable dialogue atmosphere in order to start more intense and more substantial negotiations.” It considers that “realism and compromise spirit” should motivate negotiations to reach a final settlement for the Western Sahara issue. For its part and while reaffirming that its sovereignty over the Western Sahara should be recognized, Morocco is ready to dialogue with the other party, based upon the internal autonomy plan it has presented and which has been welcomed by the international community, while the Polisario Front persists in opting for a final status of the territory that has to be decided during a hypothetical referendum including independence as an option.
This irredentist and unrealistic position, head on supported by Algeria, is not based on any historical or legal basis, as the self-determination principle is not exclusive to the unique right of peoples to decide by their own, beyond the obligation of the nations’ territory integrity, recognized by the international community.
It should be reminded that it exists an important resolution that nobody mentions, namely the 1541 resolution of December 15, 1960. It states that a colonized people has to practice the right of people to decide on their own in three situations. The first situation, is when it integrates an independent state; the second, is when it integrates a state under a federation and the third, and this is only one case among others, when it becomes independent. It is clear that over the three cases, two leads to integrity within a national framework.
Moreover, Morocco has the most absolute right to claim and reaffirm its sovereignty over the Western Sahara territory, an integral part of the Sherifian kingdom for centuries. However, considering the evolution of the conflict, the characterized involvement of other parties and the ongoing democratic process in Morocco, giving a large place to regions, Morocco has considered it necessary to propose a large internal autonomy for the Sahrawi populations, under the Kingdom’s sovereignty. An initiative widely approved and supported by the influential members of the Security Council.
In fact, the British government has urged, Thursday, Morocco and Algeria to “bury their differences” in order to settle the Western Sahara issue. During a press meeting in London, M. Kim Howells, the Minister of Foreign Office, in charge of the Middle East and North Africa, has clearly identified the problem, which is a bilateral problem between Morocco and Algeria over the Western Sahara issue and over other issues, such as boundaries definition and opening.
The British government has subtly expressed the wish to see the land boundary between Morocco and Algeria open, as this will allow trade exchanges increase between the two countries, tensions decrease and a significant increase of GDP. Great Britain is “so interested in such a solution”, has stated M. Howells pointing out that the Western Sahara issue settlement “will have an important impact on the Moroccan and Algerian economies”. He then added that “Moroccans have an idea about the best way to move towards a solution”, while “Algerians, via the Polisario, see things differently.” Briefly, the British official has undoubtedly recognized that the problem seems to be surrounded by many “unknown parameters.” In other words, all the problem complexity is due in large part to the Algerian involvement and to its nuisance power.