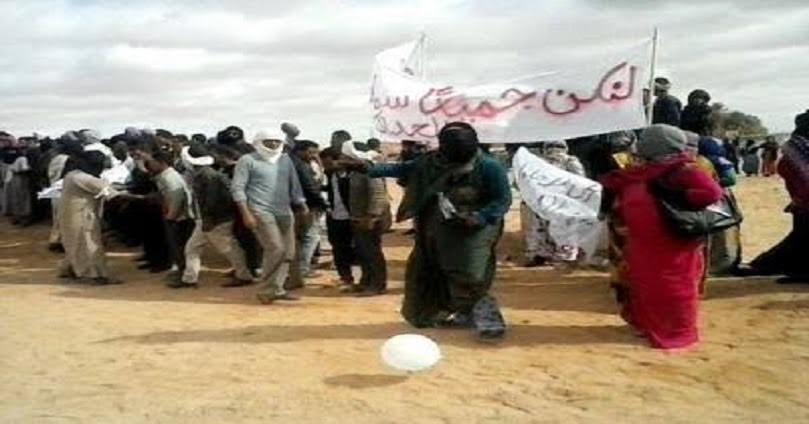 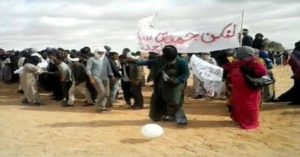 Dozens of unruly Sahrawis staged a new protest march in the Tindouf camps, defying the military siege imposed on them by the Polisario and the Algerian army.

The armed militia sent to the scene of the protest were unable to disperse the demonstrators, who threw stones at them, as shown by the images taken at the site of the demonstration, near the Tindouf camps.

The images from Tindouf circulating on social networks show that the situation has become explosive, although the Algerian and pro-Polisario media keep silent on the turmoil in the camps.

The latest turmoil was sparked following the assassination in cold blood of a camel herder from the R’Guibat Labaihatt tribe, earlier this March.

Mohamed Ould Khattry Ould El Wali was looking after his grazing camels in Wadi M’Heya, at the outskirts of the camps, when he was shot down by Algerian soldiers.

This is not the first deadly blunder by the Algerian army and the Polisario. The Algerian army shot dead two other Sahrawis in the same circumstances, not far from the border with Mauritania, early February. No investigation was conducted to elucidate their death and as usual, the Polisario leaders and their mentors stifled the incident and muzzled local media.

Riots broke out in the Dakhla camp after the double assassination, but the demonstration was violently repressed by the Polisario militiamen with the backing of Algerian soldiers.

Having lost any hope to have a better future as promised by the Polisario leaders for decades, the Sahrawis seem more determined than ever to break the military siege imposed on them. They try through their recurrent uprisings to put an end to their dire living conditions, aggravated by corruption, large-scale diversion of humanitarian aid and daily violation of their basic human rights.