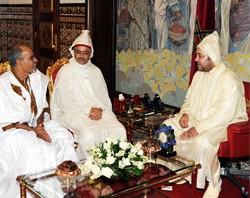 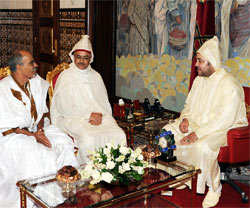 Minister-Counsellor to Mohammed Abdelaziz and Founding member of the Polisario, Ahmeddou Ould Souilem has sent an unequivocal  message to the world: the Polisario Front, one of the only guerrilla movements still existing in the world, ersatz of the cold war, is going to its end. In fact, while the whole Moroccan people was celebrating the ten years of His Majesty the King Mohammed VI accession to the throne, on Thursday 30th July, the celebration was crowned with the audience granted by His Majesty to Ahmeddou Ould Souilem, confirming the latter’s attachment to his King and his mother country, and showing clearly that the Sahara artificial conflict, fuelled by Algeria in order to establish its strategy of regional domination, is undergoing its last moments, final jumps of a history which roots go back to the pinnacle of the Marxist and Leninist movements, during and at the end of the sixties. In fact, the Polisario Front has just known the bitter side which has left speechless the very voluble press agency of the movement. At the time when the informal negotiations would start, under the UNO auspices, this defection of one of the Polisario Front leaders brings up the problem of legitimacy of the present guerrilla leaders. In fact, Ahmeddou Ould Souilem is also the uncontested chief of a tribe and enjoys an important aura, taking into consideration the position of his late father Souilem Ould Abdallah who died in 1999 and who was member of the Sahrawi Jamaa (community), and chief of the powerful tribe of Ouled Dlim.
The breaking off with the Polisario is thus at the same time a political, tribal and doctrinal one, as Ahmeddou Ould Souilem has asserted the pre-eminence of the Moroccan solution, that is the autonomy plan for the South provinces, qualified by the UNO as “serious and credible”, and supported by the international community.