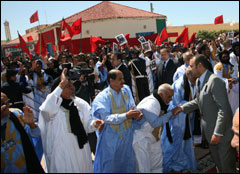 The return of Sheïkh  Ahmadou Ould Souilem, Head of Oulad Dlim Tribe and founding member of the Polisario Front, is itself an important event as it concerns the return of the child prodigy to his homeland. The event is still more important, taking into consideration the place he occupies and his being a public figure on the Polisario leading and tribal scene and also taking into consideration the international context and the invitation of the Special Envoy of the UN Secretary General, Mr. Christopher Ross for an informal meeting in Vienna between the parties in conflict, in the presence of the different parties affected by the regional importance of the Saharan conflict.
The rallying of this figurehead of the Polisario, independent and respected by all for his strictness and integrity, is the logical result of a long series of the rallying of leaders, senior executives and high ranked militaries of the Polisario to the Sherifian Kingdom, the forgiving and merciful. It confirms one and a unique truth: the Morracanity of the Sahara and the permanent existence of historical, religious, cultural and socio-economic links between the historical Morocco and the Moroccan Sahrawi tribes.
Besides, the first step made and reaffirmed by Sheikh Ahmadou Ould Souilem is to pledge allegiance on behalf of his tribe to his king. He, moreover, reiterated his will to work under the enlightened instructions of the King to help in achieving a solution to the problem, within the sovereignty  of Morocco and the completion of its territorial integrity, taking into consideration the desiderata of the Sahrawi populations, something which the project of local autonomy for the provinces of the South of the Kingdom guarantees.
Recalling the Lahmada camps in Tindouf, in the South-west of Algeria, the Sheikh has deplored the disastrous life of the populations sequestrated in precarious and frightful conditions, and has expressed the real desire of tens of executives and Sahrawi families to join most quickly their homeland and put an end to a superficial conflict which has lasted for long, motivated and maintained by the enemies of Morocco who do not appreciate the reinforcement of the democratic process in the country and the socio-economic development of its regions. Moreover, the Moroccan initiative of the Sahara autonomy make them completely confused as it does not only pull the rug out from under their feet by making  null and void, obsolete and non-productive  the idea supporting independence , within a context of worldwide terrorism, globalization and economic amalgamation, but more than that, it constitutes a danger for their own political system based on military  and guerrilla autocracy and proper economic income, excluding in effect wide levels of the population from becoming liberated and enjoying the mining wealth of their country as well as the ethnic, linguistic and democratic claims of entire communities and civil society in general.
In any case, the return of Sheikh Ahmadou Ould Suilem to his homeland to toll the knell of a separatist, tyrant, segregationist movement, in the pay of the Algiers’ leaders whose power of nuisance, helped by the gas income, is having no limit.