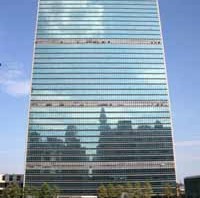 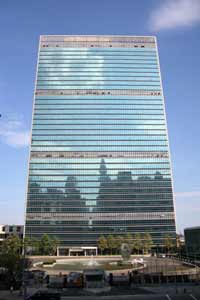 During the 64th working session of the UN General Assembly held in New York, many Heads of State and delegations have renewed, before the UN floor, their permanent support to the Kingdom of Morocco concerning the country’s territorial integrity and its efforts to reach a fair political solution to the conflict of the Sahara called the Western Sahara.
Hence, the Gambian President, Mr. Al Hadji Yahya Jammeh, has been seen in the official stand, strongly reasserting, Thursday evening, in New York, his “total support” to Morocco’s territorial integrity.
« My delegation, he emphasized, during his speech at the general debate of the 64th UN General Assembly session, renews its total support to the Kingdom of Morocco’s territorial integrity and sovereignty”. Concerning the Sahara issue, “ we will remain, he added, convinced that the Moroccan government’s proposal to grant a wide autonomy to the Sahara region based on the negotiations initiated by the UN Security Council, conducted and agreed upon by the parties, will lead to a final and peaceful solution of the conflict”.
As for the Minister of Foreign Affairs of the Dominican Republic, Mr. Carlos Morales Troncos, expressing his opinion about the Sahara issue, he has reiterated the unchanged position of his country, which supports Morocco’s position and the Security Council’s efforts aiming at the conclusion of a political agreement between the parties in conflict
Questioned by the MAP journalists, at the end of his meting with the Minister of Foreign Affairs and Cooperation, Mr. Taib Fassi Fihri, the Dominican Minister of Foreign Affairs has stated what follows: “We are with Moroccans. And Morocco knows that it can count on us in all forums”.
Also, the same support has been expressed by the President of the Union of the Comoros, Mr. Ahmed Abdallah Mohamed Sambi, who hastened to reassert his country’ “permanent” support to the Kingdom of Morocco’s territorial integrity.
The Union of the Comoros, he affirmed during his speech at the UN General Assembly debate, reiterates its “permanent support” to the Kingdom of Morocco in its “legitimate efforts in order to recover its territorial integrity”.
Furthermore, he has estimated that « peace and security remain the essential conditions for the promotion of the socio-economic development”, of the whole Maghreb region, as he has wisely remarked, “the conflict situations prevailing in a number of the world regions should draw our attention “and feed our common reflection for the good of the peoples and the communities”.
Other speeches of the Heads of State or Heads of delegation would go in the same direction supporting Morocco’s efforts and those of the UNO for the peaceful and fair resolution to the Saharan conflict, stirred up by the regional resentments and longings.