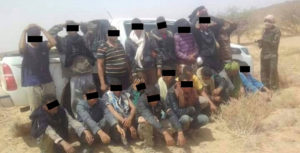 The Polisario announced the arrest last Sunday, to the east of the Moroccan defense wall in the Sahara, of 19 Moroccan civilians, accusing them of serving as mules (individual carriers) for drug dealers.

The 19 Moroccans were arrested, according to a statement from the so-called ” Ministry of Defense” in the locality of Aghchan Lbyad, near the Moroccan town of Gueltat Zemmour.

This incident took place few months after the crisis triggered by the separatist front at the Moroccan border post of Guerguerat, near northern Mauritania. The crisis ended after the UN Security Council summoned the Polisario’s armed militias to withdraw from the area last April.

It also intervened just a few days after an armed confrontation between Sahrawi drug dealers in Awsserd camp, in Tindouf, in the presence of the Polisario leader Brahim Ghali who was visiting the camp.

Through these provocative maneuvers, the separatist movement’s leadership, whose hard wing has long called for the resumption of the armed struggle, seeks to ignite tension to force the UN and Morocco to resume the negotiations on the Western Sahara issue.

Likewise, the Polisario attempts to engage the Royal Armed Forces in an armed confrontation, to meet the secret aspirations of Algerian generals who want to destabilize the Moroccan neighbor.

Since Algerian President Abdelaziz Bouteflika suffered a stroke in 2013 that left him physically incapacitated, the Polisario has been fearing the political uncertainty in Algeria, combined with rising social tension in the Tindouf camps, where the deprived inhabitants have lost all hope in a better future.

And last week, Mauritania announced the closure of its land border with Algeria which it has proclaimed “military zone prohibited to civilians”. The decision was made following the rise of drug dealing activities.

Besides, tension in Tindouf is aggravated by the underhand war Brahim Ghali’s clan has been delivering over the last few months to the supporters of his opponent, Mohamed Lamine Ould Bouhali. Bouhali and his clan cannot forget the fact that he had been dismissed, in December 2016, from the so-called key position of “Minister of Defense” that he had held for fifteen years.

In its statement, the Polisario specifies the venue of the arrest of the 19 Moroccan citizens, all from the southern provinces of Morocco, but it does not provide any proof that they are drug traffickers. One of their two cars was confiscated but no drug seizure was announced.