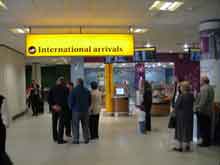 After having many times expelled journalists as well as former prisoners of the Polisario Front from Algiers airport, a curious “parallelism of forms” has been set up by the Algerian State while convincing a pro-Prolisario activist residing in Morocco to refuse to comply with the obligatory procedures during her arrival to the International Hassan 1st  airport in Laayoune. In fact, Aminatou Haïdar, being since yesterday in the international area within the airport, has refused to tell her nationality  as well as her country of destination, to the officer in charge of controlling  passports and applying related procedures. According to the international law in force, the representatives of the Moroccan State have thus  refused  Mrs Haïdar ‘s entry to  a territory, which according to her …does not exist.
The pro-polisario activist, who has provoked many times  the Moroccan authorities has, moreover, tried to shoot secretly  through the foreign journalists that were accompanying her, the control in the borders.
Trying to make the officer in charge of carrying the control,  come off his hinges, the activist had started to shout, under the astonished eyes of the other passengers. Trained to this kind of situation, the Moroccan airport authorities have thus noticed the impossibility for Mrs Haïdar to enter the Moroccan territory, and have informed her that she would remain in the international zone until there is a legal decision concerning her fate, in respect of the international law. At another level, we can only regret this poor attempt from the Algerian regime for the instrumentalization of their internal public opinion while the power is under radicalization, surrendering to the populist drifts and to the attempt of the economic and populist closing.