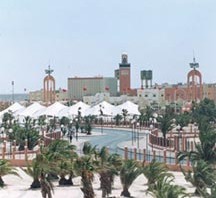 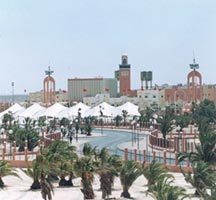 During the ministerial visit to Dakhla and within Oued Eddahab-Lagouira region, on October 27th, 2009, the Minister of the Interior Chakib Benmoussa has reaffirmed the importance that these provinces have in the national pattern of the sustainable development.
In fact, the stability and development in the Southern provinces constitute one of the main priorities of Morocco, taking into consideration the geographic, strategic and security imperatives, as well as the economic and social stakes. Consequently, the ministerial visit aimed at enquiring in situ about the general political situation of the region and about the inhabitants’ life conditions and their economic, social and cultural expectations. A meeting with MPs and the local elected representatives had taken place in order to discuss loudly the problems of the region and the specific expectations of its inhabitants. Problems linked to education, health, housing and work. The heads of the tribes (Shiouks) have insisted on reminding of their indefectible attachment to the Alaoui throne and their love for their motherland.
Concerning the stability and security of the front region, the Minister of the Interior has emphasized on reminding of Morocco’s will to insure « the security of Dakhla region, like all the front regions, against all the units acting along the front and the smuggling, drugs, arms trafficking and clandestine immigration networks”. The security authorities will maintain their high state of security vigilance and continue, “to oppose with firmness and vigilance to all acts aiming to undermine the public order in respect of law”. However, sustainable development efforts should be made in Oued Eddahab- Lagouira region, to increase the economic potential of the region, create new jobs and incite a new socio-economic dynamic, in strict respect of the ecological equilibrium and the rational management of natural and human resources, to foster the wished growth and attract investments to the region.
It is thus that many urban planning projects will be launched, mainly in Dakhla city. They are anticipated for the 2009-2012 period with a budget of 300 million DH, added to the actions undertaken by the Promotion and Development Agency in the region for the 2005-2009 period, with a global budget of nearly 1,7 billions DH, for the achievement of many socio-economic projects.
Major infrastructure projects are planned, such as the construction of the new port of Dakhla, the planning of a new tourist zone, the accompaniment of the fast demographic development witnessed by the province, the completion of liquid cleaning-up in the city and the treatment of solid wastes, and the creation of an international center for water sports.