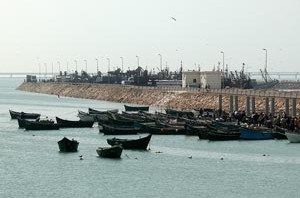 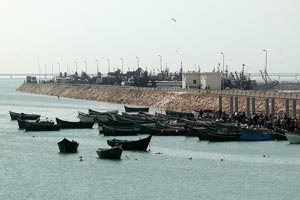 In fact, according to a recent report made by an international expert from the UNDP, achieved in 2008, based on the objective and verifiable data, with  supporting figures which were not made available to the public, it is shown that the different indicators of human development, adopted by the international organizations, such as education for children, health, drinkable water, electricity, basic infrastructure or transports are clearly higher than the national average, with an important economic well-being ratio and life conditions level higher than the average recorded in Morocco, but also in the Arab countries which do not have oil.
We have to recall back that in 1975, date when Morocco recovered its territory in the South, the rate of poverty of the semi-nomad Sahrawi was so alarming. The majority of the populations, registered in the census at that time, lived under the threshold of poverty and ignorance, illiteracy and the  lack of medical care was widespread while the basic infrastructure almost non-existent and even when they existed, they were deteriorating  and ineffective . Since then, the public authorities have really made a move on in order to make up for the accumulated delay during the Spanish colonization and invert the tendency.
Thus, between 1984 and 2004, the life conditions level and the well being of population has almost doubled . The GDP is beyond the national average and the volume of infrastructures has increased. The achieved investments, the salaries and aids made by the State have far contributed to this raising of life conditions level. The level of public education, of provision of medical care and access to infrastructures  has known a significant evolution and goes far beyond the national score. Life expectancy noted in the cities of the South, around 72,5 years, has known the same  positive evolution noted for the other human development index, as well as the significant fall of death rate.
Thus, according to the report, the evolution of the human development index continues at the proved rhythm of 2,3% per year, defined by the UNDP at 0,800, a figure considered by experts as an indicator for a high human development.
Moreover, at the linguistic level, it is to be noted that Arabic, along with Hassani become the dominant languages in the Sahara while French dominates more the economic life of the region.
Taking into consideration all the above, the report came to the conclusion that “the accumulated achievements in the provinces of the South since their integration in the Kingdom should, at full-term, allow them to exceed the threshold of irreversibility in terms of high human development”. At the end, the report recommends the establishment of big economic centres which can play the role of economic locomotive and powerful attraction and be productive of capitals and human resources around the cities such as Laâyoune, Dakhla, Boujdour, Guelmim and Tan Tan.