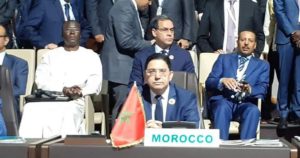 The accession of Morocco to the African Continental Free Trade Area (AfCFTA) “cannot be interpreted as a recognition of an entity” that has no attributes of a sovereign state, said Monday in Niamey, Moroccan Foreign Affairs Minister, Nasser Bourita.

At the end of the African Union extraordinary summit on the AfCFTA agreement, held in Niamey, the Moroccan minister told the press that Morocco’s ratification of the agreement “can in no way be interpreted as a recognition of a situation, fact or entity that threatens its territorial integrity and national unity.”

The head of Moroccan diplomacy who was alluding to the pseudo-self-proclaimed SADR, underlined the anomalies that taint the admission of this entity within the AfCFTA asking “how can an entity that has no territory belong to a free trade area?”

This is “a blatant aberration”, he said, as the pseudo-SADR has no territory, is established in Tindouf in Algerian territory and has not its own currency. It uses the Algerian Dinar and has no customs.

According to observers present in Niamey, Bourita’s remarks came in response to the AU Commissioner for Trade and Industry, the Zambian Albert Muchanga, who, at the closing of the summit, listed the countries that had already signed and ratified the AfCFTA agreement, and those who had signed it, but have not ratified it yet. He put the SADR and Morocco on equal footing when he said that the two would have ratified the accord by the end of the week.