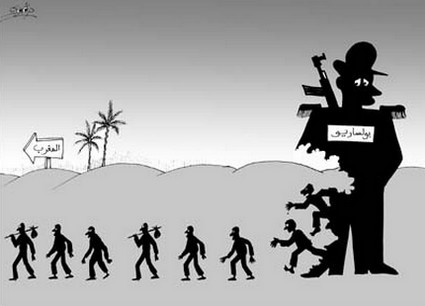 Neither the armed militia of the Polisario Front nor elements from the Algerian military intelligence services ( DRS – Security and Intelligence Department) appear to be able to stop the haemorrhage of the running away from Tindouf camps. Proof can be given by the record-breaking figure of 1000 Sahrawis who have joined Morocco in six months time, but also the phenomena of groups containing an average of fifty persons including women and children.
Even the arrest at the end of last June, by an Algerian armed commando and Polisario, of a group of 50 Sahrawis who were trying to leave Tindouf camps to join Morocco via Mauritania, did not dissuade other discontented in the camps to try the adventure of escaping from there.
We have just learned from our source in Mauritania that one hundred Sahrawis who have succeeded in escaping from Tindouf camps , a prison in the open air, are about to join Morocco.
Since two weeks ago, they file off, from early in the morning, in front of Morocco consulate services located along the Maritime avenue in Nouadhibou, to accomplish the transit formalities to join the Moroccan territory where they would meet their families and relatives, after long years of separation.

Among these future rallying people are former Polisario leadership members and the former Polisario representative in London who has decided to definitely break with separatists’ thesis, following on his colleagues’ heels, those who were in Malta, Italy, North America, Germany, France or the one working at the African Union, Mustapha Barzani.
The net closing around the Sahrawi populations sequestrated in Tindouf, does not mean anything since among the groups which have succeeded to escape are also women and infants who could, more than that, stand up to the aridity of the desert,  thirst, hunger, heatwave during the day and cold nights to join their homeland after a long and tiresome  journey.