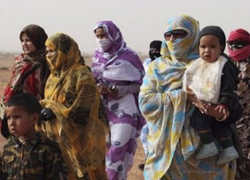 The media declarations made by Mustapha Salma Ould Sidi Mouloud, General Inspector of the « Polisario Police », announcing his support to the autonomy plan, is a black point in Tindouf closed camps. Because only one week after the adoption of the autonomy plan by the Polisario executive, Sahrawis’ voices arise in the camps, where pamphlets circulate in broad daylight. A situation of agitation which makes the Polisario leaders feel uncomfortable. The document, which has been distributed at a large scale, holds the signature of the The League of the Partisans of Autonomy in Tindouf camps. An organization which was known in last February, when it has openly called for the breaking up of Tindouf camps. Camps which Algerian leaders persist in keeping against the will of the Sahrawis themselves.

At present, the Polisario leaders’ anger is in great part due to the positive echo of these pamphlets among the Sahrawis, already tending towards the idea of leaving the camps to return to Morocco. Images on television of hundreds of young people, adults from both sexes and even Polisario executives returning to Morocco, in tens, since the beginning of the year, give an idea about the importance of the movement.
Obviously, the content of the League pamphlet has been very pedagogical, concerning the importance of the autonomy plan, whether on its political aspects or humanitarian ones. Thus, besides putting an end to the suffering and loss of freedom for Sahrawis in Tindouf, who may meet their families and relatives, the document explains that autonomy guarantees the security and future of the Sahrawis and puts an end to the various envies in the regions.