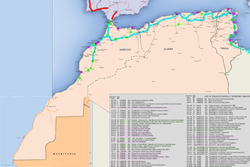 The construction of a highway can only be beneficial for everyone, provided not to stop halfway the path. The highway that should link Tunisia to Morocco, crossing the Algerian territory from East to West, is almost at the end the Eastern border of Morocco, with the opening, on Thursday September 1st, of a new 60 km section linking Sidi Bel-Abbes to Tlemcen, a border town with Morocco.
Of course, as stated by the Algerian Minister of Public Works, Amar Ghoul, Algerians “have reached today – thanks to this project, the Algerian-Moroccan borders”, but he omitted to mention that this border is being closed since 1994. What is ridiculous in the comments of the Algerian State senior civil servant is when he declares that “this important achievement will be of Maghreban nature”. But what kind of Maghreb is he talking about, the one referred to on paper since the Treaties of Marrakech or the one almost concretely inexistent? May the Algerian Senior Officials cease laughing, with meaningless slogans and wildly statements, at the memory of the Chouhadas and the understanding of the two brotherly peoples who have shared so many joys and woes.

Most recently, many calls have been solemnly launched to the Algerian brothers by the highest authorities of the Kingdom, led by King Mohammed VI, to open the border that tears apart entire families more than fifteen years ago? These families are forced to take the plane to go from Tlemcen or Maghnia to Ahfir or Oujda, while they can make such trip on foot and within a few hours.
For what good would serve billions of dollars disbursed, while at the two sides of the border, you can read signs saying “end of trip,” with a ban on crossing the barrier that destroys the hopes and dreams of a united Great Arab Maghreb?
Stretching over 1.720 km, the Algerian East-West Highway required a budget of about $ 11 billion.