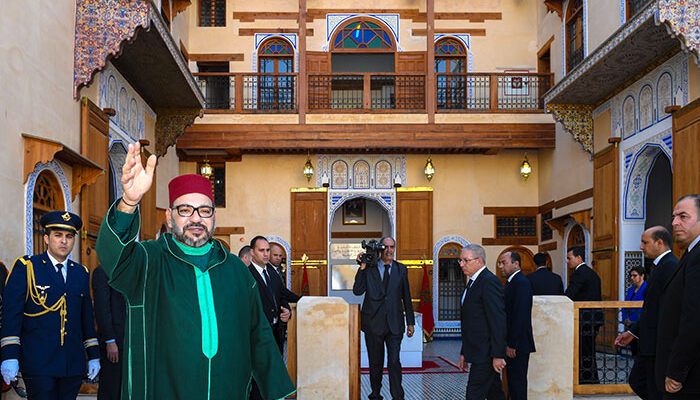 HM King Mohammed VI launched on Monday at the R’cif Place in Fez, the program to enhance economic activities and improve the living environment in the Medina of Fez (2020-2024), a new generation program aimed at safeguarding and perpetuating traditional trades and promoting the living conditions of citizens.
This program, worth 670 million dirhams, testifies to HM the King’s constant willingness to preserve the architectural and historical character of the medina of Fez and to promote the influence of this thousand-year-old city, inscribed in 1981 on the World Heritage List by the United Nations Educational, Scientific and Cultural Organization (UNESCO).
It also illustrates the Sovereign’s high concern for the ancient medinas of the various cities of the Kingdom in order to strengthen their tourist and cultural attractiveness, promote their civilizational and human heritage, and preserve their vocation as a place to live, work, create wealth and develop the social economy.
This new program, which concerns 1,197 sites, provides for the restoration and rehabilitation of the historical heritage of the medina of Fez (4 sites/MAD 13.5 million), the requalification and upgrading of urban areas (9 sites/MAD 105.55 million), the strengthening of the tourist and economic attractiveness of this City-Museum (33 sites/MAD 87.5 million), the development of local social facilities (171 sites/ MAD 263.45 million) and the renovation of dangerously run-down housing (980 sites/ MAD 200 million).
Subsequently, HM the King chaired the signing ceremony of the partnership and financing agreement relating to the program to enhance economic activities and improve the living environment in the Medina of Fez (2020-2024). It was signed by minister of the Interior, Abdelouafi Laftit, minister of Endowments and Islamic Affairs, Ahmed Toufiq, minister of National Education, Vocational Training, Higher Education and Scientific Research, Said Amzazi, and minister of National Planning, Urbanism, Housing and Urban Policy, Nouzha Bouchareb.
It was also inked by minister of Tourism, Handicrafts, Air Transport and Social Economy, Nadia Fettah Alaoui, minister of Culture, Youth and Sports, government spokesperson, El Hassan Abyaba, the Wali of the Fez-Meknes Region, governor of the prefecture of Fez, Said Zniber, president of the Regional Council of Fez-Meknes, Mohand Laenser, and director general of the Agency for the Development and Rehabilitation of the Medina of Fez (ADER), Fouad Serrhini.
Later on, the Sovereign visited the restoration site of Foundouq Khrachfiyine, a project that is part of the complementary program to enhance the Medina of Fez (2018-2023), whose partnership and financing agreement was signed under the chairmanship of HM the King on 14 May 2018 in Rabat.
Worth MAD 6 million, the Foundouq Khrachfiyin restoration project should, at the end of the work, contribute to the safeguarding and preservation of the historical heritage, the promotion of craft trades in the foundouqs and the improvement of working conditions for craftsmen.
Endowed with a budget of MAD 583 million, the complementary program for the enhancement of the Medina of Fez involves the restoration of 11 historic monuments and emblematic sites, 10 places of worship (mosques and Koranic schools) and 40 places of well-being (Hammam, fountains and sanitary facilities), the rehabilitation of 39 places of crafts and traditional trade, the improvement of the urban landscape and the built environment (17 sites) and the rehabilitation of Dar Al Makina.
Regarding this program’s progress, 18 projects have already been completed, 17 are under way, 38 are being launched and 45 will be launched before the end of the current year. Within the framework of the reinforcement of the tourist attractiveness of the medina of Fez and the improvement of the living conditions of its inhabitants, a program of development of car parks, rehabilitation of public spaces and installation of an information system (2017-2022) is being carried out.
This program, which requires an investment of about MAD 400 million, aims to improve accessibility to the old medina mainly through the development of eight car parks (Bin Lamdoun, Bab Guissa, Bab Jdid, Bab Hamra, Ain Azliten, Oued Zhoun, Bab Boujloud, Sidi Bounafae), the paving of the streets, alleys, squares, and the installation of information kiosks for the service of the inhabitants, visitors and tourists.