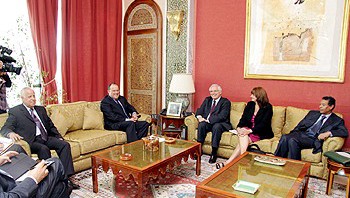 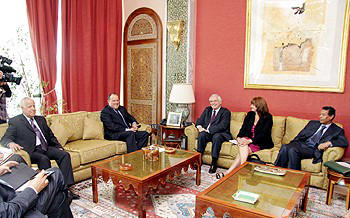 The United Nations’ emissary, Christopher Ross would not return to New York with empty hands. He has, very likely, convinced all his interlocutors to return as soon as possible to the table of negotiations, even if the latter would just be informal ones. It is in Rabat that the fourth tour of the UN SG’s peronal envoy for the Western Sahara, ended.
In Rabat, Christopher Ross has been received on Monday by the King Mohammed VI, after having held discussions with various Moroccan senior executives, among whom the Minister of Foreign Affairs and the Minister of the Interior. He has declared at the end of the Royal audience, that his visit to Morocco falls within the extension of his fourth tour in the region and the mission he has been entrusted with by the UN SG, that is the preparation of the third informal meeting expected in the coming November, from the 3rd to the 5th.
The Kingdom of Morocco and the Polisario Front should try to « reach a fair political, sustainable and mutually accepted settlement, which guarantees for the Western Sahara people the right to self-determination », has specified Christopher Ross in a press declaration.

Moreover, the UN emissary has indicated to have taken notice in each of the four steps of his tour, of the fact that the concerned parties are totally disposed to support his efforts and those of the UN, in general, to settle the Western Sahara conflict. Concerning the matters tackled during his discussions in Rabat, Ross has specified that they have concerned the political situation in all the region and the prevailing conditions. Before adding that « we have also discussed the necessity to go beyond the present situation, the modalities of negotiations process and the progress made in establishing a feeling of trust between the parties ».
Ross has again, insisted on the urgent necessity to reduce the prevailing tension and avoid anything that can cast a shadow over the atmosphere or hinder the progress achieved during the next round of negotiations. His wish till now is that the next round of informal negotiations may open the way for tangible steps towards the expected solution.
In fact, Ross’ mission is just starting, the final aim of his efforts being the final settlement of an old issue which has lasted for more than 35 years, he needs a long breath and to be as patient as he can.