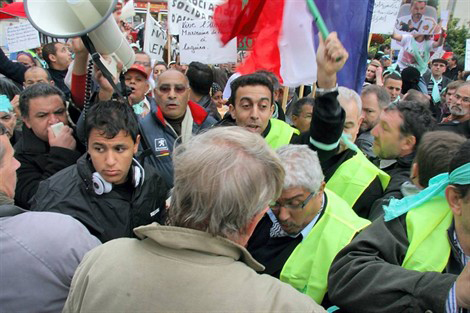 Propaganda and democracy usually do not go together. The Polisario chief, Mohamed Abdelaziz who has disowned his homeland, Morocco, where  his father and family are presently living, has failed in his new attemps to sell in France, his separatist thesis. When knowing about the holding of the international conference in support of the Sahrawi people, organized this weekend by the city council of Mans, hundreds of Moroccans supported by French militants and sympathizers coming from Mans but also from Paris, Strasbourg (Alsace) and Nancy (East) have crowded towards the city council which hosted the separatists and their accomplices. Mans counts about 25.000 inhabitants of Moroccan origin, that is 17% of the total population. They have come to say no to the hosting by this city of this conference supporting Polisario. They think it concerns a pure anti-Moroccan propaganda demonstration, financed by the Algerian system and supported politically by the socialist mayor of the Mans city, Jean-Claude Boulart and the European accomplices and particularly the Spanish ones. The last gathering taking place on Sunday, has witnessed the participation of hundreds of people who, during three days, have occupied the ground, to reiterate their attachment and the attachment of the Moroccan people to the moroccanity of the Sahara.

Through their slogans and their banners, the demonstrators have thus succeeded to make aware the elected representatives and the native inhabitants of Mans to the relevance of the autonomy plan and especially to denounce the presence of the so-called president of the ghost Sahrawi republic « SADR », in the country of the Universal Declaration of Human Rights while the rights and freedom of the Sahrawi refugees in Tindouf, are totally flouted by the Polisario armed militia.
In front of the Palais des Congrès of the city, hundreds of voices have denounced the atrocities committed in Tindouf camps in the South-West of Algeria, under the command of this same Abdelaziz, qualified to be the « jailer in chief ». The demonstrators have directly called the latter as well as the Algerian authorities, highly represented in this conference by many diplomates, local representatives, many activists and a horde of special envoys from Algerian media, about the destiny of Mustapha Salma, former Polisario police chief, kidnapped, tortured and sequestrated in a secret place for having openly declared to be supporting the Moroccan autonomy plan. The first day of these demonstrations has ended in a crowning glory, with an evening animated by the Jil Jilala. This big concert has created a festive atmosphere, enthusiastic to the rhythms of the Green March emblematic song « laayoune Ayniya, Sakia Lhamra Liya ». The show delighted the public, on the opposite, circumstances oblige, it has quite annoyed the mayor’s guests.