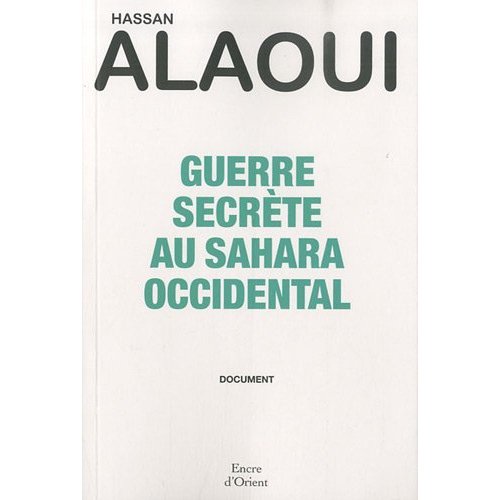 Since today, Wednesday 3rd November, it is the book with a special subject, the Western Sahara, which occupies the head of honors list concerning the books dealing with Africa in the mega-library on Amazon line. In fact, the book « secret war in the Western Sahara » written by the Moroccan writer Hassan Alaoui, is at the head of this prestigious classification, almost one month after its being put in library in Paris, editions Encore d’Orient. Hassan Alaoui’s book was published some few time before the book of Hocine Malti, which title is also suggestive « secrete history of the Algerian Petroleum ». Is is quite by chance that two books pointing out  the responsibility of Algeria , at the same time, in the Sahara conflict and in the misappropriation of funds generated by petroleum, be placed at the head of best sellers of African honors list ? certainly not, because it indicates an important interest for the books that allow to decode the system set up by the « military intelligence regime », to take up a gripping expression used by Hassan Alaoui in his book.

In the latter’s decription, we can thus read : « Since more than thirty years, in his capacity as chief editor, then executive director of the Moroccan daily paper « Le Matin du Sahara et du Maghreb, Hassan Alaoui has closely followed the secret war going on in the Western Sahara. Intrigues, traps, interventions of special services, ego and money stakes, this war was the scene for incidents that the writer describes with talent, including exclusive revelations. Revelations which Hassan Alaoui forbids himself to talk about for many years. They help to understand certain forced positions, to know about the personality of major parties involved in this issue and to understand the atmosphere of secret negotiations which took place since the 80s till the negotiations known under the name of « Manhasset process », which on the opposite of the previous ones, are official. Houari Boumediene’s changes, the about-face of Mouammar Kadhafi, the missed appointment of Abdelaziz Bouteflika with Hassan II, are all stories that lend color to this document and give it its real dimension. This book comes on time. The AQIM penetrating the Sahel, threatening France, are elements that justify the emergency to end up, says Hassan Alaoui, with a global agreement concerning the Western Sahara, otherwise, we’ll have to fear a lot. Un exeptional document ! ».