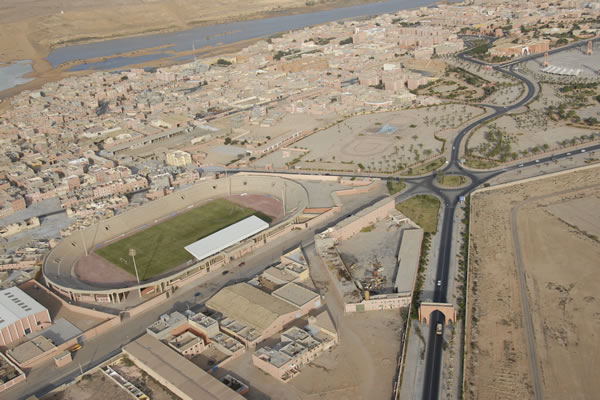 After the altercations having happened in the tents camps of Gdem Izik, set up near Laayoune city, between a group of ex-prisoners opposed to the demolition of tents and the majority of people who wanted to leave the camps as their social claims were satisfied, order forces have intervened to release the persons kept as hostages by these ex-prisoners who did not allow them to take their tents, as stated by a human rights organization’s correspondent being present there.
Thrown into a panic by an increasing number of people which take their tents and go back to Laayoune, once their social claims were satisfied, the members ot this small group, armed with large knifes of all kinds and cudgels, stood against the leaving people. The members of this group are all ex-prisoners, crooks involved in druggs traffic and networks for illegal immigration and shady dealing of all kinds. Some wanted by the police, it is the case of the called El Aaroussi Abdeljalil, at the head of a gang well known in the region for stealing cars. He is supported by another crook called Babite Sidi Brahim, already sentenced for two years prison for committing different swindling acts.

The gang has imposed a real curfew inside the camp, preventing any person from leaving without being authorized by its henchmen. Many campers have decided to stand against them, provoking altercations which have, many times, gone too far between the two camps. Finally, the overwhelming majority of persons who wanted to take their tents and go back to Laayoune, have asked the order forces to deliver them from this real hostage-taking.
In front of the degradation of security conditions threatening the majority of campers, the order forces have intervened to deliver the latter from the crooks.
The order forces intervention has ended up with the arrest of many members of this group. It has also allowed the citizens to demolish their tents and go back home since their claims regarding employment, lodging and socio-economic aids were satisfied.