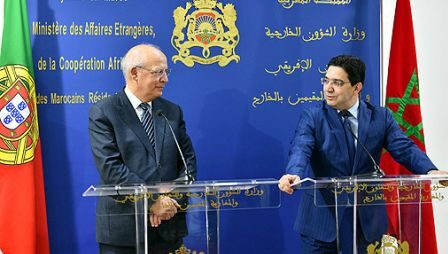 Rabat – The Portuguese Foreign Ministry has highlighted the restraint shown by Morocco in El Guerguarat crisis and its commitment to the ceasefire in the Sahara.

Portugal’s position was expressed following a telephone conversation on Wednesday between the minister of Foreign Affairs, African Cooperation and Moroccans Abroad, Nasser Bourita and his Portuguese counterpart, Augusto Santos Silva.

The Portuguese FM also welcomed Morocco’s commitment to achieve a political solution to the Sahara issue, under the aegis of the United Nations.

During their talks, Mr. Bourita informed the Portuguese top diplomat on Morocco’s actions to preserve road traffic in El Guerguarat, said a statement from the Portuguese embassy in Rabat.

The two ministers also discussed bilateral relations, the preparation of the High Level Meeting between the two countries, to be held in 2021, and relations between the European Union and the countries of the southern neighborhood, according to the same source.

Portugal will hold the presidency of the Council of the European Union for the first half of 2021.