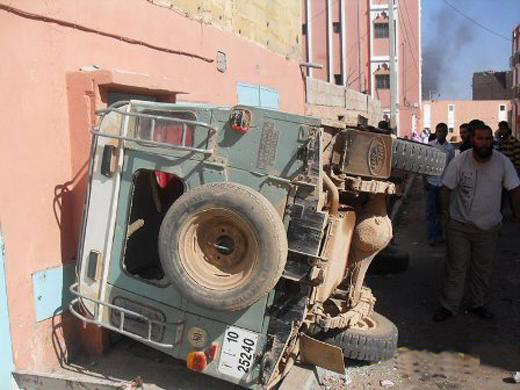 Acts of violence and vandalism committed during the Laayoune incidents, the nature of means and arms used by the young agressors and troublemakers, their organization and the planning of their actions are such a dark point which needs to be clarified. Besides, the legal investigations started about this issue, a great number of people involved in associations and NGOs are willing to know a little more about the real instigators and silent partners of these incidents and their reasons as well as on foreign possible complicities. The Moroccan Center for Human Rights (CMDH) which does not exclude the involvement of the Polisario and the Algerian military intelligence services, in the incidents which have plunged into a bloodbath the city of Laayoune, last Monday,  has asked the UNO to make an international investigation about this matter. A report made following the field investigation led by the CMDH executive body, deals also with the existence of a coordination, in a way or another, between the Polisario leadership, the Algerian intelligence services and certain politically inclined circles, among which the Spanish pro-separatist organizations.

Moreover, many witnessers in Laayoune speak about the presence during these incidents, of infiltrated elements who call themselves the moulathmounes (hoods) speaking a language different from the one used by the Sahara inhabitants. A language which is rather closer to the one used by the young people indoctrinated by the Polisario in Tindouf camps. These suspected elements who are alwas moving with their faces hidden by some kind of scarves, may have infiltrated the Western Sahara, among the last waves of rallying people who are escaping from the Tindouf camps to join Morocco. The CMDH report presented on Thursday in Rabat, underlines that these elements remote-controlled by the Polisario and the Algerian intelligence and security Department (DRS), « have tried to gather a civic protest to serve and external agenda, at a time when all the parties in conflict about the Sahara were around the negotiations table under the UN aegis » , in Manhasset, near New-York. The CMDH reaches the conclusion that the disruptive deeds committed in Laayoune, were not innocent, but were aiming at distorting a legitimate protest against the socio-economic conditions of the inhabitants and  making  a political claim out of it. The coming days would certainly reveal some surprises which we were not expecting.