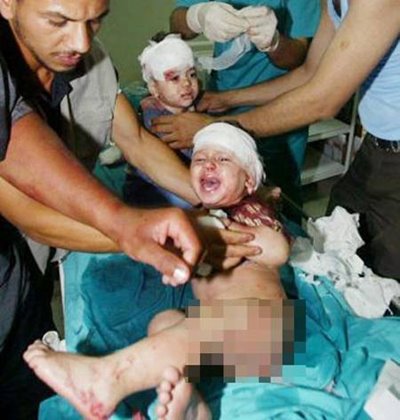 The unbelievable thoughtlessness which the Spanish media have shown while covering the violent incidents which have taken place in Laayoune, on the 8th November, have made them lose all sense of moderation to the point of being caught out at their own game. A picture of Palestinian children going back to 2006 has been published by many media as a picture of children injured in Laayoune, in violation of basic rules of ethics. The picture showing the Palestinian children injured during an Israeli raid on Gaza, in 2006, has been reproduced by the Spanish daily paper El pais, which has shamelessly attributed it to imaginary Sahrawi children in Laayoune. What is worse, El Pais was not the only one to fall in this gross trap. The Spanish press agency « EFE », which was the first one to have spread the picture, has contaminated the other Spanish newspapers. « the infection » spread to other editings : « El Mundo », the electronic newspaper « El Semanal Digital », the free press « Qué »… More amazing, EFE, looking for excuses to justify its fault, gets more bogged down. In the absence of photos reflecting the scenes of violence in Laayoune, EFE states having simply got its pictures of what it called the « Sahrawi militants » from electronic sites. Without the slightest verification. This acknowledgement is perhaps the best illustration of this infamous complicity in the falsification of facts by the ones and the others. The first ones take their information from the second ones and vice versa.

How to explain such a sheeplike behaviour from newspapers which, nevertheless, claim to have a long media practice ? It is difficult to find an explanation other than the stubbornness of the Spanish media to report all which is negative about Morocco, even by inventing some facts through pinching whatever picture on the web. Can we consider that the Spanish media are blind by the side they are taking ? Is it a matter of ethics, deontology or is it all this at the same time ?