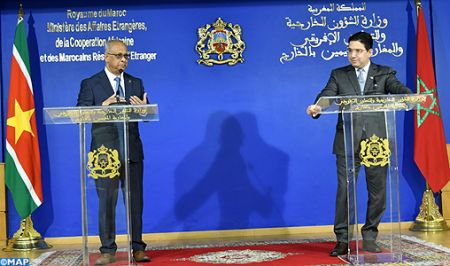 The Republic of Suriname has decided to open an embassy in Rabat and a consulate in Dakhla, in order to give impetus to bilateral relations and cooperation with Morocco, Surinamese Minister of Foreign Affairs, International Trade and International Cooperation Albert Ramdin announced on Thursday in Rabat.

In a press briefing after his talks with Minister of Foreign Affairs, African Cooperation and Moroccans Abroad Nasser Bourita, the Surinamese top official said he had discussed with his Moroccan counterpart the opportunities to develop b2b relations between the two countries, with a view to strengthening bilateral trade within the framework of South-South cooperation.

“To this end, the government of the Republic of Suriname announces that it will set up an embassy in Rabat and a consulate in Dakhla, in order to boost bilateral cooperation and promote investment and trade,” he added.

Regarding the regional dispute over the Moroccan Sahara, Ramdin reaffirmed “the support of the Republic of Suriname for the territorial integrity of Morocco by reiterating its unshakeable position concerning the Moroccanness of the Sahara and the sovereignty of Morocco over its southern provinces.”