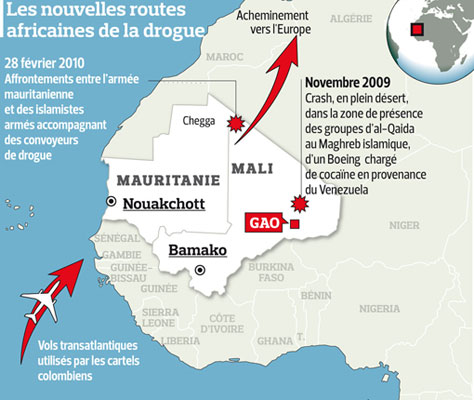 The Malian security forces have just achieved a good haul which promises to be essential to sort out a tissue of ties accomplished between AQMI, the Polisario and the Mafia networks in the Sahelo-Saharan region. The arrest on the 9th December, in the North of Mali, of six “important drug traffickers”  coming from Polisario ranks, has just confirmed the persistent suspicions about the existence of close relations between the terrorist groups, drug traffickers networks and the Polisario Front.
In fact, a Malian security source has secretly informed the AFP that the Malian forces have « arrested on Thursday six important drug traffickers who market drug in Europe through the Sahara » according to a Malian security source.
This achievement of Malian forces is very significant especially that it happens two days only after the similar operation of the Mauritanian army in the East of the country, at the frontier with Mali. The intervention of the Mauritanian army has ended with the arrest of seven traffickers by the Mauritanian army has ended with the arrest of seven traffickers and the death of two among them. It is revealed that the seven traffickers arrested by the Mauritanians were partners of the six traffickers arrested by the Malians, according to the same Malian source.

But the great effort made by investigators remained focused on searching for the real identity of a certain Sultan Ould Bady. He is a « Sahrawi, an important drug trafficker  wanted by many police forces in the sub-region », specifies the Malian security source. He “had kidnapped and resold many European hostages in the Sahara before rejoining the AQMI ranks”, according to another Malian source.
Some revelations which confirm the suspicion of many western intelligence services on the existence of real relations between the AQMI jihadist groups, elements of the Polisario and traffickers of all kinds who proliferate in the  Sahara and the Sahel wide desert area.