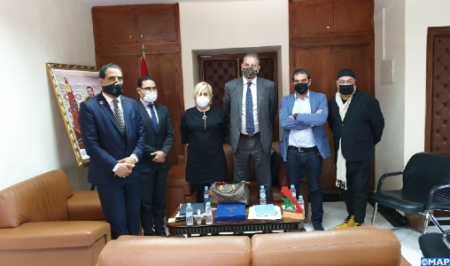 A large delegation of Basque businessmen made a prospecting visit to Dakhla on Thursday, with a view to discovering the investment and trade opportunities offered by this region.

On this occasion, Basque economic stakeholders and businessmen discussed investment and business opportunities in different productive sectors of the Dakhla-Oued Eddahab region, such as agro-industry, fishing and renewable energies.

They expressed, on this occasion, their great interest in this region and their wish to contribute to the local economic dynamic, by seizing the various investment opportunities offered.

The Basque delegation, led by Maria Tato, a businesswoman at the head of more than 30 companies and hotels, met the Wali of the region of Dakhla-Oued Eddahab, governor of the province of Oued Eddahab, Lamine Benomar, members of the Regional Council and the director of the Regional Investment Center (CRI), Mounir Houari.

“The purpose of this visit is to learn about the development efforts made by Morocco at the national and regional level, in particular in the southern provinces, which are of particular importance”, underlined Alfredo Silvan Fernandez, a businessman specializing in industry, in a statement to the press at the end of meetings with regional officials.

Silvan Fernandez stressed the importance of the infrastructures in the regions of Laayoune-Sakia El Hamra and Dakhla-Oued Eddahab, saying that this visit made it possible to observe the efforts made through several infrastructure projects carried out in various fields.

“This first visit allowed us to get an idea of the potential investment opportunities, in particular in the sectors of renewable energies, food industry, agriculture and fisheries,” he added.

The purpose of this visit is to examine the possibilities of partnership in the fisheries sector, with a view to further strengthening trade relations in this field, underlined for her part Tato, who leads the Basque delegation.

The city of Dakhla offers huge fishing potential, part of which is intended for export to Spain, she continued, adding that this prospecting visit is a good opportunity to discuss cooperation opportunities between Morocco and the Basque region in the fishing sector.

This visit reflects the attractiveness of the southern provinces and the common desire to consolidate and boost trade, investments, and co-investments between the Basque region and the Kingdom of Morocco, by expanding the areas of cooperation to other areas of common interest.