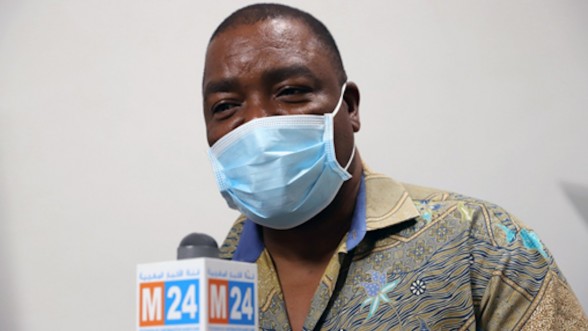 The ambassador of Eswatini in Rabat, Promise Msibi, said Saturday from the city of Laayoune, that his country “will always be by Morocco’s side” in defending its full sovereignty over the Sahara, rejecting any attack on the territorial integrity of the Kingdom.

“No one has the right to interfere in the question of the territorial integrity of Morocco. This question must be left in the hands of HM King Mohammed VI and the people of this great Kingdom,” Msibi told MAP, on the sidelines of a visit to the Consulate General of Eswatini in the capital of Moroccan Sahara.

The ambassador, who is also a permanent representative of the Kingdom of Eswatini to the African Union (AU) in Addis Ababa, hailed the major projects carried out in the southern provinces of the Kingdom to improve the quality of life of the local population.

“It’s amazing what I’ve seen here. These landmark constructions offer enormous business and employment opportunities to many people,” he said.

He noted that the important infrastructure built in the region “will certainly facilitate” trade and economic cooperation between Europe and Africa.

Msibi also highlighted the multiple actions taken by HM the King to “advance idea and objectives of the African Union and regional integration”, while describing as “excellent” the relations between the two friendly kingdoms.

In addition to expressing the “unwavering support” of the Kingdom of Eswatini to the Moroccaness of the Sahara, the diplomat said his trip to Laayoune aims to ensure “that all the necessary conditions are in place for our Consulate General to carry out its mission in an effective and efficient manner.”

Accompanied by the Secretary-General of the Wilaya of Laayoune-Sakia El Hamra Ibrahim Boutmilat, the ambassador also visited the Specialized Institute of Applied Technology (ISTA) in Al-Wahda in Laayoune.