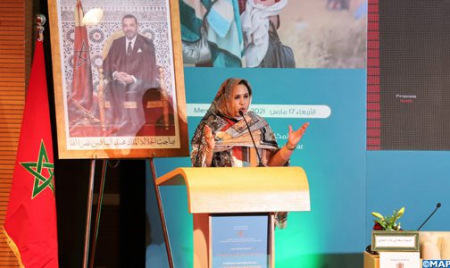 The delegation by the host country of its legal responsibility to a fictitious entity is at the origin of this confused situation, said the speakers at this meeting, organized by the National Commission of International Humanitarian Law (CNDIH), which was the an opportunity to present several examples of the several and serious physical and psychological violations that Moroccan Sahrawi women have suffered for two generations.

In this regard, the human rights activist and member of the Royal Consultative Council for Saharan Affairs, Saadani Maalainine, gave a testimony on her forced displacement at the age of 9, as well as other children, to Cuba, where she remained without any contact with her family for 18 years.

Maalainine also spoke of the systematic violations of human rights in the Tindouf camps, saying that the leaders of these camps are busy twisting the will of the inhabitants to serve their own political and personal goals.

“It is a strange paradox that the Polisario leaders with their hands soiled by violations, adopt a victim position in front of the world”, said the activist, who denounced the violation of children’s rights through forced displacement, military recruitment, torture, indoctrination of hatred against Morocco, and many other heinous practices.

For his part, Buchanan Ismael, university professor and former dean of the School of Economy and Governance in Rwanda, underlined that Morocco and Rwanda seek to defend women’s rights and promote their status, stressing that the two countries are advocating at the international level to end their suffering, in particular women victims of abuse, persecution, deprivation and persecution in the Tindouf camps, thanks to the institutional reforms undertaken by the two countries.

Buchanan referred in this regard to violations suffered by women in the Tindouf camps, in particular the scourge of slavery which still persists, noting that the daily life of these imprisoned women who are enduring inhumane situation remains outside international human rights monitoring, due to the host country’s ban on human rights defenders’ access to the camps.

The speaker also underscored the urgency of advocacy for the rights of the inhabitants of Tindouf, in particular women, given the continued diversion of humanitarian aid which affects the daily lives of these kidnapped people, stressing the need for the census of this population which constitutes “a fundamental principle of any initiative aimed at guaranteeing the rights of women in the camps”.

In her turn, the president of the Sahara Media Center for Studies and Research, Mahjouba Daoudi, highlighted the various forms of human trafficking, forced marriage and sexual exploitation, in addition to cases of rape and extrajudicial execution of women by Polisario leaders.

Daoudi noted that the lack of basic health infrastructure and the use of detention centers worsen the already tragic situation of victims of oppression, especially women and girls.

For his part, Eric Cameron, the president of the NGO World Action for Refugees based in Norway, said that the dire situation of women in the Tindouf camps results from the continued diversion of humanitarian aid, noting that the people held against their will are suffering from chronic diseases, such as anemia, as well as several nutritional deficiencies.

The conference, which was attended by government officials, was marked by the broadcast of video messages of women victims of sexual violence while they were held in Tindouf and military recruitment, while other women spoke about their journey back to the homeland.