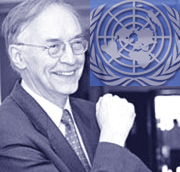 The Personnal envoy of UN's Secretary General Ban Ki moon, in charge of Sahara, gave his analysis of the situation in a press conference held after he presented his report to the Security concil. Although M. Van Walsum kept a very diplomatic worthing concerning the Sahara conflict, he recognized the preeminent role of Algeria, who refuses to be called a "part" in the case, but nonetheless has a tremendous influence.M. Van Walsum also said that "Self Determination doesn't mean systematically independance". "Algeria has in this whole dossier (Sahara issue) played an absolutely preeminent, dominant role ever since 1975", van Walsum, told the press, following the United Nations Security Council's (UNSC) closed hearing on the Sahara issue, opposing the kingdom to the Algeria-backed "Polisario" separatists, who claim the independence of this former Spanish colony, retrieved by Morocco in 1975. "I have to say it would be totally dishonest if I didn’t mention that they (Algerians) played an important role" in the conflict, he said, noting that "if there is one thing I've learnt in this one year and a half (as a Personal envoy), it is not to try to formulate exactly the role of Algeria," a country that insists "it is not a part in the conflict".

Morocco has recently presented to the UNO its proposal to grant substantial autonomy to its southern provinces (the Sahara) to end the three-decade old dispute.The Senior UN official made it clear that “the Moroccan proposal was the result of an extended political process of national and international consultations, whereas the Polisario separatists’ proposal “came as a surprise at least to me”. “I haven’t been informed it was on the making (…) it is consistent with Polisario well known positions,” he said, stressing that self-determination does have to mean independence.There are many examples in the world where concerned populations chose, following referendum consultations or other, autonomy or total integration, he noted, ascribing this choice to security or economic advantages.Citing the Ban Ki-moon’s, latest report on the Sahara, he called to "the parties," to enter into negotiations without preconditions to reach a just, final and mutually accepted solution.”“I have unlimited faith in direct negotiations,” he said, urging the international community to participate so as to get out of the current stalemate.During the meeting UNSC members stressed unanimously the importance of the Moroccan initiative for negotiating an autonomy statute for the Sahara region, and commended Morocco’s efforts to get out of the current stalemate.